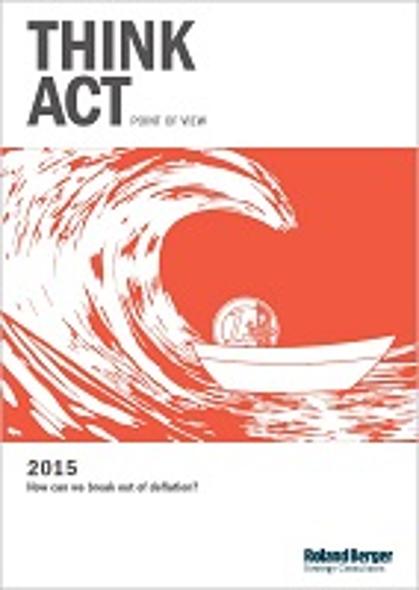 How can we break out of deflation

The real challenge in 2015 will be to avoid the economic shipwreck of the Eurozone in what is often presented as a Japanese-style deflationary scenario. Unfortunately, that scenario seems more and more plausible – prices have been going down over the past two years and the inflation rate has become negative at the beginning of 2015.Technically, of course, this could be described as disinflation rather than deflation, or as a trend towards low inflation, in order to avoid stigmatising a general fall in prices.

A distinction could also quite justifiably be drawn between good and bad deflation – a drop in oil prices causes good deflation, whereas a drop in demand and pay causes bad deflation. Or, resorting to purely technical definitions, it could be pointed out that “deflation” means a fall in at least 60% of the prices on the inflation index (oil products excepted), and this has not happened.But these subtle academic distinctions are of no interest whatever. We are in the midst of a demand crisis. Demand is too weak and is producing insufficient growth.

The economic actors are postponing their consumption and investments, causing a price fall which is leading to deflation. Many major economic factors are at play here: an ageing population, the shift of growth centres to other continents, the lack of a forward-looking industrial policy, an inability to modernise our economies through non-confrontational social dialogue, the maintenance of a partially ineffective welfare state, insufficiently entrepreneurial attitudes etc.

How can we break out of this deflationary scenario? The recent quantitative easing (QE) by the ECB will not be a silver bullet. A set of overlaid solutions focusing on the simultaneous easing of budgetary and monetary policies is required.

How can we break out of deflation

The real challenge in 2015 will be to avoid the economic shipwreck of the Eurozone in what is often presented as a Japanese-style deflationary scenario.