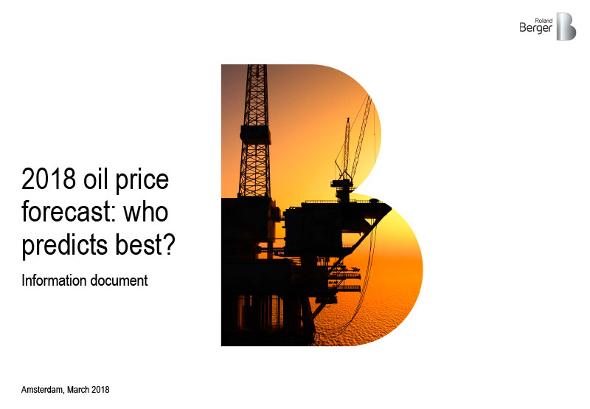 Oil-producing countries and major institutions both predict a moderate increase in average oil prices to USD 54 per barrel in 2018, from USD 51 in 2017. While OPEC production cuts have propped up prices, the emergence of the U.S. as the world's largest oil producer has more than filled the output gap, capping price rises. Still, in 2017 the market experienced its first period of undersupply since 2013, as growth in demand outpaced the rise in supply.

These are some of the results of our annual oil price forecast, in which we analyze the price forecasts of the largest oil-producing countries and major institutions, as well as the market dynamics and trends that have influenced oil prices in the past—and those that will continue to do so in the future.

Global oil prices have recovered from their deep plunge in 2014, not least due to a landmark decision in 2016 by the Organization of the Petroleum Exporting Countries to cut crude oil production. However, the production decline's impact on prices has been partly offset by an increase in swing capacity from US shale oil.

"Oil producing countries and institutions alike expect only a limited increase in prices for 2018. This takes into account OPEC's decision to cut back production, but also demonstrates the U.S. industry's ability to fill the resulting gap in supply," says Arnoud van der Slot, Roland Berger senior partner. "Looking at the currently proven reserves, U.S. corporations can maintain pressure on the price as a swing supplier well into the next decade – the time when some expect oil demand to peak. Hence, it is likely that prices will remain at current levels in the foreseeable future."

The growth of U.S. shale oil production by approximately 5.6 million barrels a day since 2008 is the main reason behind the overall growth in global oil production. The ramp up in U.S. production, which has turned the country into the world's largest oil producer, accounted for more than 60% of the global increase in output between 2008 and 2016.

"'Looking at the currently proven reserves, U.S. corporations can maintain pressure on the price as a swing supplier well into the next decade – the time when some expect oil demand to peak."

Our research also looked at the gap in forecasting accuracy between the top-forecasting oil producing countries and three major institutions, the New York Mercantile Exchange (NYMEX), the U.S. Energy Information Administration (EIA) and the Organization for Economic Co-operation and Development (OECD).

Last year, institutions were once again more accurate with their forecasts than the three best forecasting oil-producing countries. Based on track results from 1999-2017, the top three forecasting countries were Iraq, Nigeria and Saudi Arabia. Last year's relatively high margin of error was mainly the result of Saudi Arabia's much too bullish estimate of USD 71.6 for a barrel of West Texas Intermediate (WTI). Among all forecasters, the IEA was the most accurate, predicting an oil price of just above USD 50.

Since 2009, institutions have been better forecasters of prices than oil-producing countries, prior to which it was the other way around. The outperformance of institutions coincides with the rise of the US as a major (shale) oil producer and exporter. As the role of oil-producing countries in controlling supply has diminished, so it seems has their ability to correctly predict prices.

Looking further ahead, oil giant BP predicts global oil demand to peak at around 110 million barrels a day somewhere between 2025 and 2035. With proven reserves of 48 billion barrels, which at current production rates should last more than 10 years, the U.S. looks set to ride it out until peak oil, maintaining pressure on the oil price as a swing supplier.

''I don't expect there to be a real spike in the market, barring some geopolitical event…I've always said we're in the USD 50-60 range until the end of the decade.'' says BP chief executive Bob Dudley.

Oil prices are set to rise moderately in 2018, according to our annual review of oil price predictions and trends.