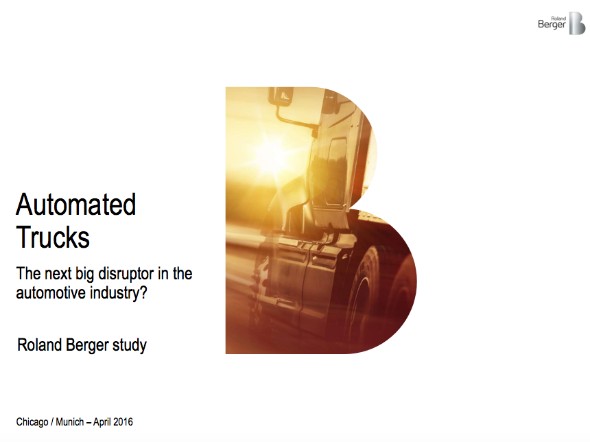 It’s no secret that the future of the automotive industry will be a driverless one—car manufacturers have been traveling this road for many years now. However, advancements in technology have reached a point where automated trucks have the potential to bring a disruptive change to the trucking industry. This automation would allow companies to save substantial amounts on the cost of fuel, drivers, and vehicle safety, as well as provide wider societal impacts such as reduced emissions, less congestion, and safer roads. Currently, 90% of truck accidents are caused by human error, and automated trucking has the potential to effectively eliminate this risk.

This automation will not take place all at once, but instead will be spread over 5 stages from assisted driving and partial automation to, eventually, full automation where the driver has no input in the navigation of the vehicle. "Each stage of higher automation brings with it increasing costs up to to 23,400 USD per truck in the final stage", says Stephan Keese, senior partner responsible for Roland Berger's Americas Commercial Vehicle practice. "A key driver behind the high cost is software, which accounts for approximately 85% of total cost".

Depending on the circumstances, a three-year payback of these costs is possible through coordinated vehicle platooning on long-haul routes in order to save on fuel costs. This study details the cost benefit and investment payback you can expect from various use cases of automated trucking, and outlines the competitive advantages large fleets would gain over smaller, owner-operated companies who would have less opportunities for platooning.

Due to the limited commercial benefits gained in many cases by transitioning to automated trucking, we expect to see limited pull from fleet operators, as well as limited push from OEMs until a number of legal and cyber security issue are resolved. This means that the largest driving force behind the adoption of automated trucks will likely not come from the industry itself, but from the increasingly strict safety regulations it will be subject to.

The next big disruptor in the automotive industry?