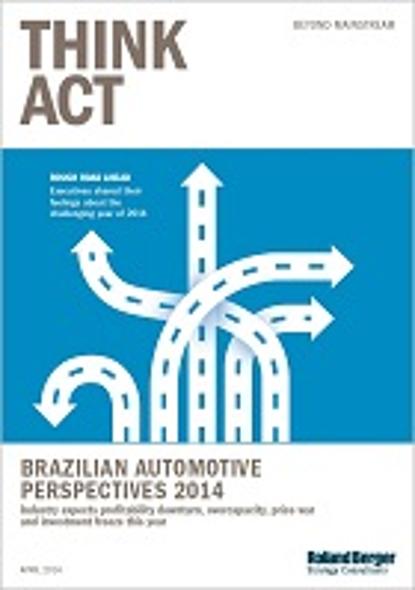 The survey shows that automotive industry executives in Brazil are primarily concerned with profit margins (57%), idle capacity (31%) and supplier relationships (28%). Factors such as logistics (16%) and R&D (9%) are not considered the main challenges.

According to the executives, the main concerns at the top of the industry's strategic agenda are price wars among automakers (51%), new players entering the market (47%), portfolio renewal and productivity ramp-up (both 31%).

Of respondents working in the light vehicle segment, 56% believe that sales will stagnate in 2014, albeit with minor fluctuations from -2% to 2%, while 31% expect a slight increase of up to 5%. Despite the expected stagnation, executives believe that there will be a modest increase (5%) in production, driven by a slight recovery in exports. The main reasons given by industry executives for this scenario are tax policies, car prices, economic uncertainty in Brazil and access to credit. This contrasts with the actual development to date in the Brazilian market which shows a decline both in terms of sales and production.

More optimism is found in the commercial vehicles sector: 55% of the executives in this segment expect 2014 to be a year of moderate growth (of 5%), with prices remaining stable (fluctuating between -5% and 5%). This positive expectation was not met by the actual market development which shows a significant decline in the first months of 2014.

Among the executives interviewed, 46% expected the business relationship between OEMs and suppliers to remain the same, compared to 30% who expected some ups and downs in the relationship this year.

The increase in global platforms is still seen as neutral or negative by 44% of respondents, who believe that this trend increases the risk of losing ground to global suppliers.