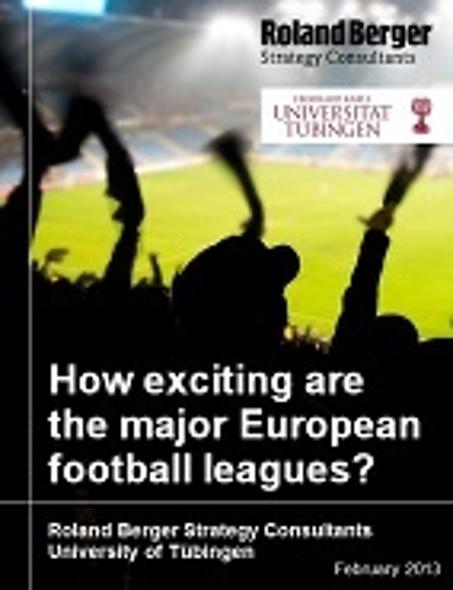 Roland Berger Strategy Consultants and the University of Tübingen have produced a study that investigates the extent to which Europe's five biggest football leagues – in Germany, England, Spain, Italy and France – deliver genuine excitement. The study authors define excitement in terms of a high level of competitive intensity, because football matches and championships are only exciting if the spectators cannot reliably predict their outcomes in advance. Based on a variety of statistical ratios collated from the seasons 1991/92 through 2011/12, the study calculates the intensity of competition – how exciting football leagues really are – in the long term (seen across several seasons), in the medium term (within a given season) and in the short term (analyzing the predictability of individual football matches on the basis of betting odds).

Compared with the other countries examined, the intensity of competition is relatively high in the German and French football leagues. Both leagues consist of teams whose strength and financial situation are relatively evenly matched. Both are therefore the most exciting and unpredictable. "Having said that, other factors – such as a club's history and popularity, as well as local derbies – are also important to fans' subjective sense of excitement," study author Professor Tim Pawlowski of the University of Tübingen acknowledges.

Over the past ten years, however, the intensity of competition has dwindled in all five leagues. The key reason is an imbalance in clubs' funding options. "The top teams are increasing the gap between themselves and the smaller teams. In some cases, the distance is considerable," notes study author and Roland Berger Partner Björn Bloching. "That is primarily because of the substantial bonuses attached to the UEFA Champions League."

Bloching adds that the battle for the league championship, which reflects the medium-term competitive balance, is more boring in Spain than in the other European leagues: "The dominance of the two bonus- and debt-financed all-star line-ups of Real Madrid and Barcelona makes genuine competition impossible."