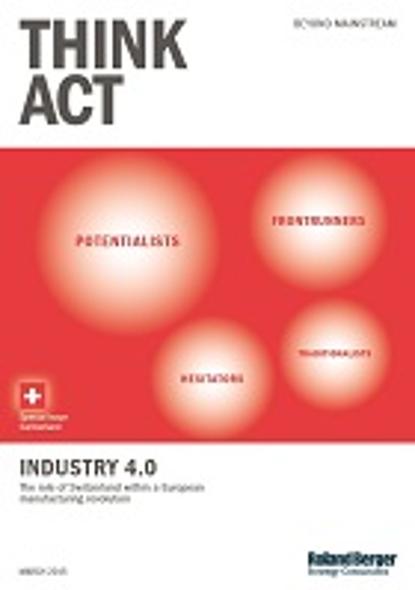 Industry 4.0 – The role of Switzerland

In the past 20 years, European industry has lost more than 10 percent of its global market share. At the same time, emerging nations have doubled their share to 40 percent.

Taken as a whole, Europe is developing in different ways. Switzerland succeeded in maintaining the high level of its industrial share of value at 19%. This value is 15% for Europe overall, results are only higher in Germany and the Czech Republic.

Switzerland is currently best placed to assume a pioneering role on the Industry 4.0 stage. It tops the charts in all key indicators. For instance, 6% of the Swiss labour force work in technology and knowledge-intensive sectors, a peak value it shares with Finland in Europe.

And it ranks first in Europe in terms of industrial share of value in industrial production per employee. While in Switzerland an employee generates a value of 206,000 EUR per year, in Poland the figure is a mere 26,000 EUR.

Innovative Swiss companies can be among the winners if they actively shape a new industrial era and if they understand that digitisation changes the nature of their value creation and requires them to develop new concepts.

At the same time, commitment is called for at European level: policy-makers must create dynamic innovation-friendly conditions now. Strategic partnerships will also play a major role towards mutual success.

Industry plays a pivotal role in the European economy: it contributes 15 per cent of the industrial share of value, creates 80 per cent of the innovations and accounts for 75 per cent of exports. If you include industry-related services in the calculation, then industry can be seen as Europe's socio-economic engine. However, the manufacturing industry is coming under increasing pressure. The competitiveness of European industry is in decline due to new market players – from Asia in particular – and this has led to significant job losses in established markets such as Great Britain (-29%), France (-20%) and Germany (-8%).

European countries are also developing in very different directions: while Switzerland and Germany have been able to hold onto or even increase their share in industrial markets, other EU countries, such as France, Spain and Great Britain are moving towards an era of de-industrialisation. This development is weakening Europe as a whole, with the resulting depletion of jobs and know-how in industry.

In the new Roland Berger study "Industry 4.0 – The role of Switzerland within a European manufacturing revolution", Roland Berger experts highlight what companies and politicians should do to support the development of Industry 4.0 – fusion of industry and digitisation – and focus on the opportunity it presents to Switzerland in particular.

Industry 4.0: The role of Switzerland

The role of Switzerland within a European manufacturing revolution