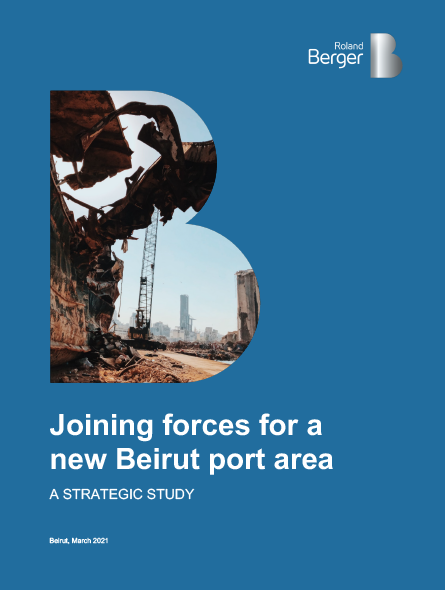 Reforms are needed to create an efficient economic hub for Lebanon

Crises create opportunities. In the case of the Port of Beirut, the devastating explosion of August 2020 creates an opportunity to carry out the reforms urgently needed at a national and local level to turn it into a transparent, safe and efficient economic hub for the country and wider region. Those reforms include revamping the law on ports and reorganizing the overall governance structure of ports in Lebanon. The administration of customs, including customs law itself, is in need of revision. A streamlined system connecting all the stakeholders in Lebanon's ports in a transparent manner would be desirable. The Port of Beirut also needs an effective Port Authority with clear roles and responsibilities and a strong plan for the future.

This study was a research project that was partly co-financed by the German Federal Ministry of Economic Cooperation, carried out chiefly between November 2020 and January 2021. In it, we detail the structural, economic, social and political reforms needed at a national and local level in order to unlock the future development of the Port of Beirut – and, by extension, of Lebanon as a whole. Implementing the actions that we recommend as a matter of urgency will, we believe, not only transform the Port into a powerful hub but also open up long-term economic opportunities for much of the country's population.

We begin our investigation by assessing the current situation and forecast future demand and throughput at the Port of Beirut. The Port is the central hub for incoming and outgoing goods in Lebanon as it handles approximately 90 percent of Lebanon's sea trade by value. The city of Beirut and the greater Beirut region are home to about one-third of the total population. This means that a large share of imports for domestic consumption remains in the region, while imports supplying industrial activities are further distributed around the country. Trade volumes are largely driven by imports based on domestic demand and consumption, and so are closely correlated to gross domestic product (GDP). Our research indicates that trade volumes through the Port were relatively stable from 2015 until the start of the economic downturn in 2018.

The good news is that in a "reform and revival" scenario, which assumes major political and economic reforms such as those laid out by the IMF and the World Bank in the latest Lebanon Economic Monitor, Lebanon could see double-digit growth of GDP in 2022 and 2023. Demand could increase as early as 2021, and historical volumes from 2018 and 2019 could be achieved within seven to eight years. Overall trade stands to exhibit a seven percent compound annual growth rate (CAGR) over the coming decade – depending, of course, on how fast the necessary structural political and economic reforms take place.

A plan for the future

We outline a possible development strategy for the Port of Beirut. Our blueprint comprises various strategic options for the port (including its future role and location), an overall business development strategy and potential spatial development plans – that is, where the port should be rebuilt and how the surrounding area could be developed. We also formulate a recommendation for the future governance model at the Port.

In terms of strategic options, we believe that the Port of Beirut will most likely continue to serve mainly domestic demand. The transshipment business at the port could also be expanded, as the services offered and the pricing structure at the Port are broadly in line with the strategies of the shipping companies and the Port benefits from its location on the Eastern Mediterranean. On the business development side, we recommend increasing the efficiency of the Port by streamlining port storage areas and moving dirty bulk outside of the Port area.

A key question concerns the future spatial development of the Port. Here, a number of options present themselves with regard to how to use the space that is currently available and what options, if any, exist for expansion. In the short term, we believe that the focus should lie on reconstructing the Port itself. At the same time, however, Lebanon should consider a time horizon of more than five years with respect to future development and growth opportunities. We discuss three options in detail, which will require a detailed pre-feasibility study and (technical) feasibility study. Additionally, any decisions in this area will also depend fundamentally on political alignment between the different stakeholders at both a local and national level.

Critically, Lebanon requires a new governance structure for this ports, with clearly allocated responsibilities and accountability. We recommend a three-tiered structure, with a National Port Development Committee and National Logistics Committee at the top, a Port Authority in Beirut, and private-sector involvement in day-to-day operations (cargo handling and other services) based on management contracts, concessions or other public-private partnership models.

Guidance for policymakers, donors and investors

Lebanon stands at the beginning of a long journey. The reforms that are needed structurally at a national and local level, from creating a national governance entity to setting up a new Port Authority, are vital in order to rebuild investor confidence. But immediate action is also needed to clear away the damage, dispose safely of the waste and reconstruct the Port. This should be accompanied by a prefeasibility study with a time horizon of the next two decades and beyond, looking at forecast handling of cargo by type, vessel forecasts, operations and layout planning, investment needs and hinterland access, and including a financial analysis, competitive assessment, details of the governance structure and an analysis of the socio-economic impact . That should be followed by a detailed technical feasibility study, including soil, navigation and traffic studies, detailed design plans, detailed capital expenditure estimates, a pricing plan, partnerships, an organization and management plan, an environmental management plan, detailed financial analysis including risks, and a financing plan.

Our study, with its recommendations and strategic roadmap, can serve as a basis for planning this journey. It provides orientation for all stakeholders, both inside the country and abroad, who believe in the future of Lebanon and its economic potential in the region.