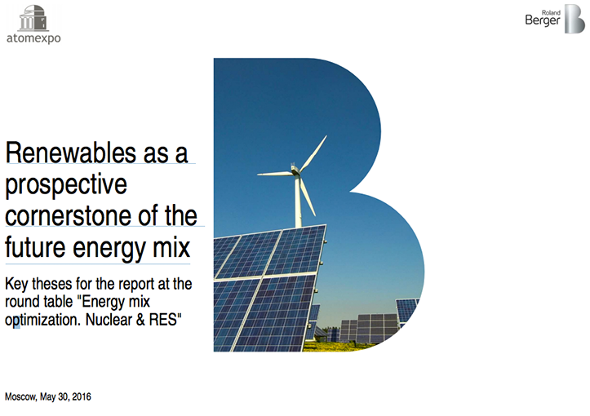 Renewables, along with nuclear power, are widely considered as environmentally friendly and carbon-free energy sources destined to play an increasing role in the global energy mix. Becoming progressively mature and competitive, renewable power is nowadays on the verge of a set of technological breakthroughs as well as significant changes to conventional business models.

In this regard Denis Borisov, Project Manager from the Moscow office of Roland Berger, was invited to present our company's view on the future of international nuclear power and renewables as complementary energy sources at the annual Atom Expo congress held in Moscow on May 30-June 1, 2016, along with other high-profile speakers represented by executives of governmental bodies, international institutions and business majors, including Ministry of Energy of Russia, Rosatom, Russian Venture Company, Hevel, EvroSibEnergo, Bloomberg and others.

The document presented during the event was dedicated to the forthcoming evolution of the role of renewable energy sources (RES) in the next 10-15 years, comprised both technological and commercial perspectives and was based on the RB project experience in Germany, France, Spain, Italy, US and other mature energy markets.

In his speech Denis outlined 5 key observations on the emerging shifts in the renewables industry.

First of all, cumulative installed renewable power capacities have been growing exponentially over the past 15 years. Moreover, in 2016-2018 solar and wind capacities are expected to further grow by 100% and 50% respectively. In numerous economically developed countries like Germany and Italy in the next decade the installed RES capacities' volume can catch up with the base load capacities.

Denis went on to specify that renewables become increasingly cost competitive, as demonstrated by the retrospective dynamics of the levelized cost of electricity (LCoE). There are four reasons why the LCoE of renewables will retain its downward dynamics in the future and won't become an asymptote.

Given the renewables industry's decreasing dependency on state incentive schemes, Denis concluded that more and more non-energy players will invest into RES. Recent examples of such investments show that former "corporate social responsibility" considerations are being replaced by two purely business-driven considerations, i.e. covering own energy needs via RES (e.g. Mars with its 200 MWe of installed wind power capacities, which covers 100% of the company's energy needs in US) and increasing revenues along the power value chain (e.g. BP, Total).

At the end of the speech Denis emphasized that, becoming more intelligent & more competitive, renewables can soon become capable of covering semi-peak electricity demand and, in specific countries, when combined with nuclear power plants and flexible power sources like gas turbines, even contribute to base load demand. Essentially, this can herald a new stage in the evolution of global energy systems.

We as Roland Berger look very much forward to these exciting changes and will continue rendering our intellectual support to energy majors in the VUCA world.

Key theses for the report at the round table "Energy mix optimization. Nuclear & RES"