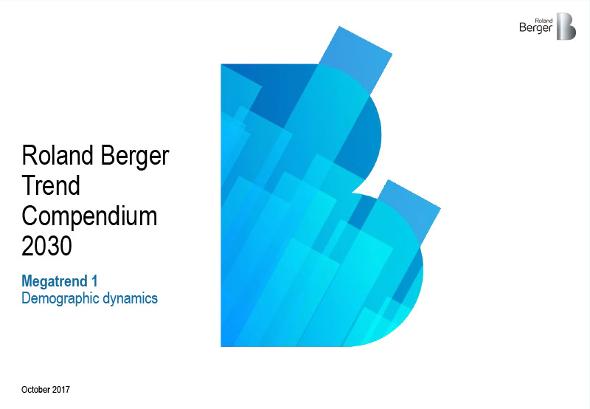 The growth and aging of populations, migration, and urbanization are factors that will shape the course of societies and economies. As one of seven megatrends identified and analyzed in our Trend Compendium 2030, changing trends in demographics loom large. In this publication, we take a focused look at demographic dynamics, their impact on our world, and how they will affect the way we do business.

World population will increase from 7.4 to 8.6 billion people by 2030, and we will see 97% of this growth in developing countries — particularly India, Nigeria, and Pakistan. Populations are growing and aging. By 2030, half of the global population will be over 33 years old. Meanwhile, in countries such as Niger and Somalia, the median age will remain low, with more than half the population being below the age of 16 and 18 respectively. The Japanese at the other end of the spectrum will have a median age of 52 by 2030.

Migration data tell a two-sided story: An estimated 34 million people will be moving from less developed countries to developed countries until 2030, with North America and Europe remaining the main destinations. But the net migration pace is slowing.

Urbanization will also increase steadily. On average, 60% of the world population will live in cities in 2030 – ranging from 81% in developed countries vs. 56% in the developing world. However 94% of this urbanization will take place in developing countries, and more megacities will emerge, particularly in Asia. Megacities face characteristic challenges to ensure a decent quality of life and sustainability, including resource and waste management, security, and traffic.

We conclude this study with a number of recommendations for corporate action: Investors and entrepreneurs should focus on growth regions without losing sight of the opportunities presented by countries with shrinking populations. In many developed countries, people aged 60 and over will become the largest consumer segment, and demand for services and products from this group means growing opportunities. Immigration is also an opportunity to fill a growing skills gap in the workforce, often at a lower cost. Finally, growing cities will have a huge demand for infrastructure of all kinds, and the private sector is well placed to meet this demand.