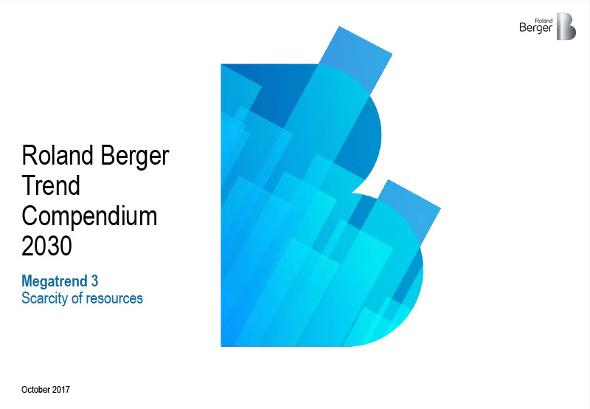 In our Trend Compendium 2030, we identify seven megatrends that will shape the world between now and 2030. Resource scarcity is paramount among these trends, and the world's growing population is facing shortages in three key areas: energy, water and food, and other, rarer commodities.

Population and GDP growth, urbanization, and a growing global middle class lead to an increasing demand for energy. Continued development in non-OECD countries is expected to increase demand by 29% between now and 2030, mostly concentrated in Asia, and particularly China and India. In 2030, like today, most energy will come from fossil fuels. A continued reliance on fossil fuels is tempting, but it also risks accelerating climate change. Despite the dominance of fossil fuels, the sun remains a vast, mostly untapped energy source, delivering more than 1,300 times the Earth's daily energy consumption to land each day.

Water and food also stand to become increasingly scarce—we predict global water demand to rise 32% by 2050, driven mostly by the growing manufacturing and electricity sectors. Scarcity of water is already widespread, however, and even today many European countries face low resources per capita. By 2050, over 50% of the world's population will live in water-stressed areas. Demand for food will also increase 43% by 2050, mostly driven by population growth and changing eating habits.

A final area of scarcity is critical raw materials. China is the major supplier of these materials, which include rare earth elements and metals. Demand for these raw materials will grow depending on the supply situation. The main challenge associated with these shortages is one of regional imbalance: most critical raw materials are produced outside of Europe, and conflict over these resources could arise between developed and developing countries.

Driven by the entwined engines of population growth and development, resource scarcity is a trend that will only continue into the future. Without reducing consumption and dependency, competition and conflict over scarce resources will become a likely reality. We conclude this publication by laying out the good news with the bad, as well as recommending considered courses of action.