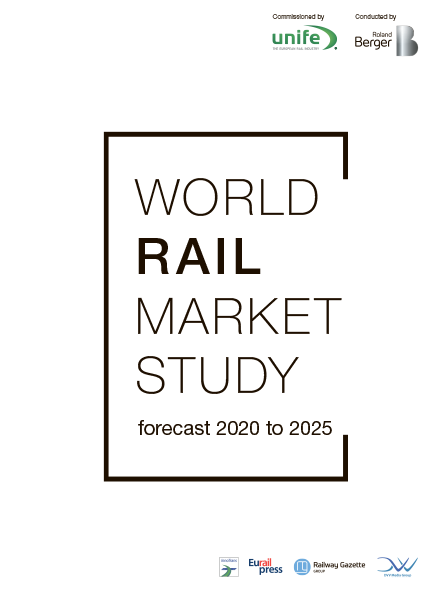 The rail supply industry has experienced consistent long-term growth over the last few decades. While the COVID-19 pandemic has disrupted this growth path by causing lower passenger and freight volumes for rail operators, the attractiveness of rail will allow the sector to recover quickly and continue its positive development. This is the assessment of the authors of the "World Rail Market Study 2020", which Roland Berger conducted on behalf of UNIFE, the Association of the European Rail Supply Industry.

At the end of 2019, rail transport reached a record market value of EUR 177 billion. The sector has experienced annual growth of 3.6 percent since 2017, largely driven by significant investments in rolling stock, infrastructure and rail control. In addition, the number of vehicles and amount of track kilometers in operation – known as the installed base – has grown significantly. Impressively, the global rail network has been extended by 23,300 kilometers and the number of vehicles has increased by 20,000 units since 2018.

In the first half of 2020, however, the COVID-19 pandemic triggered an eight percent drop in transport volumes. Lower passenger and freight volumes resulted in postponements and cancellations of orders, as well as a lower services volume. Despite these challenges, the resilience of and continued need for rail mean that experts expect an average annual growth rate of 2.3 percent until 2025 (including the eight percent drop). As a result, the total market volume is expected to reach EUR 204 billion by 2025, based on an assumption of a rapid recovery of the market, known as the V-case scenario.

The major areas of growth

Prior to 2020, much of the rail growth was taking place in the Asia-Pacific region and Western Europe, with respective contributions of 5.3 percent and 3.8 percent to the positive development of the entire market. In the upcoming years, CIS and Eastern Europe will add considerable market volumes, encouraged by government initiatives such as the Rail Baltica project. Latin America has the highest growth forecast in the rail control market on account of significant investment in the freight sector. The market for rail supply is also expected to see sustained demand from mature markets like NAFTA and Western Europe. Overall, rail control and infrastructure are forecast to grow at the strongest rates, while rolling stock and services will likely remain the largest segments.

International trade barriers, such as the sanctions against Iran or the tariffs imposed between the United States, China and Europe, have recently developed into serious risks for the railroad sector. For example, the share of the world market for railroad technology accessible to European companies has shrunk slightly in recent years (from 63 to 62 percent). In order to encourage fair competition – a key market factor that helps improve products and services and increase attractiveness for rail operators and customers alike – all markets need access to all suppliers.

An industry bound to stay on track

The inevitable expansion of public transport in major cities and the planned shift of traffic to railways will continue to drive growth in the sector. Urbanization, population growth and increasing environmental awareness will result in a greater number of railway passengers as they shift from other modes of transport. Global trends such as digitalization and automation will also enhance the attractiveness of the rail sector by improving intermodal connectivity and increasing efficiency.

Furthermore, political initiatives such as the European Green Deal will continue to benefit the demand for rail solutions. With continued efforts by governments and careful navigation of the obstacles presented by COVID-19, rail supply companies can look forward to continued growth in both mature and emerging markets.

Article
Decarbonization is a hot topic in the railway industry