Barriers to FinTech innovation in the Netherlands

While neighboring countries are getting serious about digital innovation in the financial services, three barriers are holding the FinTech sector in the Netherlands back: outdated regulation, insufficient expertise at the regulators, and poor cooperation between startups, existing players and government.

This is the conclusion of a joint study by Rabobank, ING Netherlands, Holland FinTech and the consultancy firm Roland Berger.

According to the study, financial technology, generally abbreviated as FinTech, will drastically change the financial sector in the coming years. Digital technologies are making it possible to loan, transfer and invest money in new and different ways. The study, Barriers to FinTech innovation in the Netherlands, concludes that the Netherlands has the potential to become a FinTech hub, but that for innovation to succeed, government, regulators and the private sector must do their homework.

Don Ginsel, director of Holland FinTech, explains: "It's not just because the financial sector generates 7 percent of GDP, but also because of what FinTech can mean to the other 93 percent. Our country's people and companies need the best financial infrastructure possible." Rabobank and ING want to emphasize that FinTech has broad application, from simplified payment streams in healthcare to smart contracts for legal services.

For the study, researchers spoke to eighteen FinTech experts and fifteen regulatory experts. They also conducted a survey among startups, investors, innovation managers at banks, and other innovation experts. The results were discussed on Thursday, January 21 in the Finance Committee of the House of Representatives of the Netherlands.

The study found that the Netherlands is home to a strong digital infrastructure, a financially attractive business climate, and that salaries and offices here are affordable. At the same time, however, three barriers stand in the way of a flourishing FinTech sector:

"The Netherlands has the potential to become a leader in FinTech," says Ginsel from Holland FinTech. Globally, this sector is growing fast, tripling in investments between 2012 and 2014 with more than 12 billion dollars devoted to FinTech companies. Ginsel continues, "To be a follower, then we at least need to adapt our regulations along the lines of our neighbors. If we want to lead, then more needs to be done." Mark de Jonge, partner at Roland Berger, adds, "The Netherlands won't catch up to London, but we do have the potential to become the point of entry for British companies that want to expand on the continent."

A sector vision is needed

For de Jonge, the United Kingdom can be an example. "They have shown how much a clear vision for the sector, developed together by the government, regulators and market players, can contribute to its success." Ginsel agrees. "A shared vision, which establishes what each player can do, will help FinTech considerably. In any case, it will make the jobs of regulators easier." De Jonge adds, "It would also help if it were possible to issue provisional permits. This could create a 'testing ground' where regulators and companies can come together to discover the brand-new terrain of FinTech and gain valuable knowledge in turn."

According to Ginsel, banks and other financial institutions can play a bigger role in the development of the FinTech sector by taking a more open position. Their systems and processes are not equipped for cooperation with FinTech startups. "If the government, regulators and private players do their homework, FinTech can become the next 'mainport' of the Netherlands: or should we say the next 'payport'."

In order to establish what needs to be done, Holland FinTech, on behalf of its supporters, has written a policy paper. "Regulators and government are starting to realize the need to play an active role in this changing market," explains Ginsel. "We want to help them by providing an understanding of the developments. This will hopefully create room for responsible financial innovation."

Barriers to FinTech innovation in the Netherlands 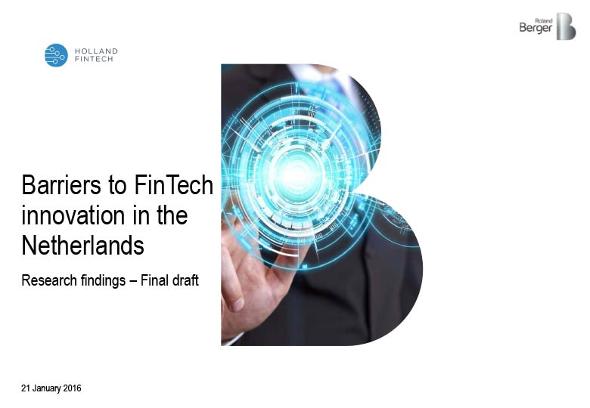 FinTech players are disrupting Financial Services – Which barriers need to be overcome to support FinTech in NL and enable innovation?