The latest edition of "Automated Vehicles Index," a quarterly study issued by Roland Berger and Forschungsgesellschaft Kraftfahrwesen mbH Aachen (fka), analyzes automated vehicles from both industry and market perspectives on a global scale. Internationally, US and German automakers still lead the field when it comes to autonomous driving. What will be crucial for the future, however, is how governments shape the legal framework for test vehicles and type approval of self-driving vehicles in their individual countries.

The index compares the state of industry development in the key markets of Germany, France, Italy, the UK, Sweden, the US, Japan, China and South Korea. Internationally, Germany and the US defend their lead in the index, with Sweden the third.

Within the industry indicator, the number of vehicle models equipped with automated driving functions rose dramatically across all countries in the last 12 months. Nevertheless, this barely affected Germany's leading position because German OEMs already offered automated functions in almost all vehicle categories, with only the exception of city cars.

Chinese automakers have launched their first vehicles with partially automated driving functions, however, this concentration solely on SUV segment is the reason why China's position registered only a minor improvement.

Reflecting the availability of vehicles with level 2 functions in the respective national markets, the market indicator has seen a lot of movement at the top with China quickly narrowing the gap and now ranks equal second with Germany, trailing only the US.

In the race to achieve full automation, the crucial advantage will be found in developing the technology and testing it in real-life conditions on the roads. Even though more than 95 percent of that can be done in a virtual environment, real fleets of physical test cars are going to be indispensable for the foreseeable future. The sooner the systems are put into commercial use in vehicles – to develop and refine the system based on the real-life driving data collected by the vehicles, the sooner they will be able to evolve. The outcome of that will be a self-reinforcing effect which companies can use to build up a dominant position in the market.

There's no doubt that the research and development activities concerning testing and technology undertaken by most carmakers and suppliers are currently concentrated in the US, which thanks to the support of the regulatory framework within which they operate.

Unlike in Germany and Europe, legislation in the United States already permits highly automated vehicles to be used in a commercial context. No type approval is necessary in the US. Self-certification is fully sufficient, and all that it requires is the presence of certain vehicle attributes like a steering wheel. Even for level 4/5 certification only certain criteria need to be fulfilled, making the licensing process relatively uncomplicated by comparison.

It is therefore very likely that the majority of the road tests planned or already underway will be in the United States. Consequently, the US is expected to be able to further expand their leading position in this area.

China has, up to now, been very conservative in its provisions for the public testing and operation of automated vehicles. However, the current ban may be about to come to an end, as work has already started on a law to define the corresponding regulatory framework and necessary requirements.

"The legal framework covers about 14 different aspects, testing automated vehicles being a very important one," says Ron Zheng, a Roland Berger Partner. "There have been many active testing initiatives in Beijing and Shanghai, and lots of other related researches and discussions are underway. With the support of government and carmakers, the legislation work has been pushed forward rapidly, which once enacted, will play a positive role in the development of autonomous driving in China." 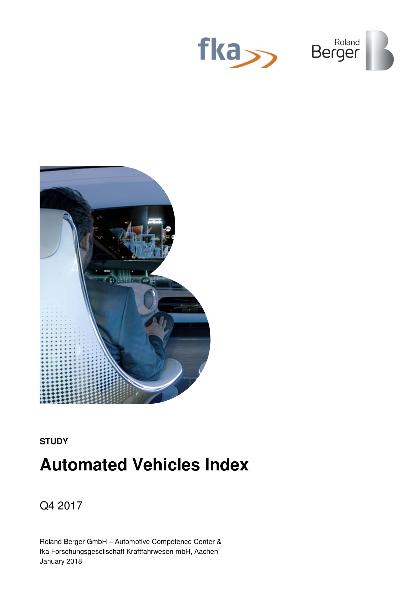 Manufacturers are racing to bring highly automated vehicles onto the market.