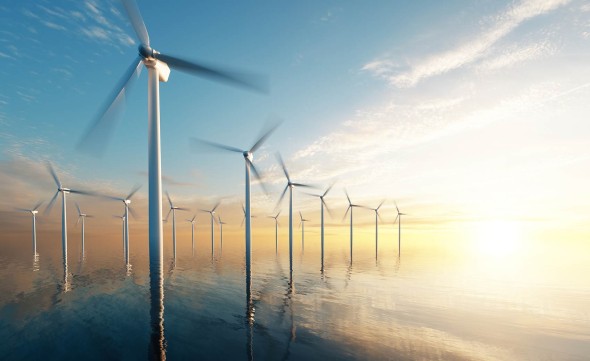 Hybrid projects: How to reduce the cost and space of offshore wind projects

The European energy system is rapidly changing. The continent’s energy transition is in full swing, with production switching from conventional fuels to renewable sources. This process is being driven by society’s desire to decarbonise and mitigate the effects of climate change. The European Commission and EU Member States actively support these goals. In December 2015 they committed to decarbonisation in Europe by signing the Paris Agreement. A rulebook produced at the 24th Conference of the Parties in Katowice in December 2018 supports the implementation of the Paris Agreement.

These aims, and indeed the energy transition itself, are dependent on offshore wind power. But to fulfil them, existing offshore assets should be cost effectively and sustainably expanded.

The vast offshore wind-power potential in the North Seas is one of Europe's greatest renewable assets. The North Seas region has an estimated economically attractive potential of more than 635 GW by 2030. It is already being tapped, with installed wind capacity expected to reach 90 GW in the next ten years. But to fully exploit the potential, wind farms need to be built ever further out to sea. This makes development more complicated and more expensive. If viable projects are to be realised, it is crucial to reduce the costs of and space needed by offshore assets using innovative solutions that efficiently connect wind farms to land. Hybrid projects offer just such a solution.

Traditionally, offshore wind-power projects have a strong national focus with the power transmission line feeding just one national grid. Additionally, offshore generation is usually not coordinated with nearby developments in other countries. Hybrid projects are different; they combine generation and transmission elements, linking two or more countries and providing a platform for coordination between them. In the North Seas, this could, for example, mean a joint development of an offshore wind farm and an interconnector, allowing a Dutch wind farm to be connected to the British and Dutch grids.

Compared to their conventional reference cases, in which generation and transmission assets are developed and operated as separate entities, hybrid projects have several benefits:

However, hybrid projects are more challenging to develop than conventional offshore wind-power projects. For example, they pose significant legal and regulatory barriers. Bearing in mind their key role in the energy transition and decarbonisation, this means there is a clear need to assess their use in practice.

What are the specific findings of the study?

18 potential hybrid projects have been identified based on conventional developments in the North Seas which are in the early stages of planning or construction.

Of the 18 hybrid projects, five are found to be significantly more beneficial than their respective reference case. The five projects show potential for cost savings of between EUR 300 million and EUR 2,500 million, depending on the size of the comparable conventional project. This translates into 5-10% of total project costs.

Legal, regulatory and other barriers hinder the development of hybrid projects. The construction of the Kriegers Flak hybrid project in the Baltic Sea, the one hybrid project nearing commissioning, shows that these barriers are surmountable if stakeholders make a concerted effort. To ease the process, Action Plans containing specific mitigation measures to overcome the relevant barriers have been developed. In general, the measures tackle ad hoc or project-specific problems. But where they concern hybrid projects in general, they could also be effectively addressed at European level.

How to make hybrid projects a reality?

To tackle the barriers to the increased realization of the North Seas offshore wind potential through the implementation of hybrid projects, four main recommendations can be summarized. These are based on project-specific assessments:

1. Implement HANSAs, project-specific legal agreements to provide security for developers: Although the European Union is planning an internal energy market, most countries still place more emphasis on their own energy policies and rules. This hinders the implementation of transnational projects, such as the hybrid projects. Hybrid Asset Network Support Agreements address this problem. They ensure that specific mitigation measures designed to overcome relevant legal and regulatory barriers are developed and implemented, offering both shorter-term certainty and the possibility of informing future legal frameworks.

2. Provide public funds to de-risk pilot projects: Hybrid projects are riskier than conventional offshore developments. They are largely untested, require collaboration between multiple parties and integrate several projects into one. Developers therefore need incentives to switch from a conventional offshore project to a hybrid one during its early stages. Public financial support is key to this, helping developers and investors to de-risk pilot hybrid projects and allowing for early-stage alignment across assets and countries.

3. Agree rules to fairly share costs and benefits among countries and stakeholders: Stakeholders are unlikely to commit to a hybrid project without first knowing what benefits and costs it will bring them. For example, while country A may carry the burden of grid connection costs, country B may benefit from cheaper electricity. Such inequalities call for clear rules governing the fair allocation of costs and benefits in hybrid projects.

4. Widen the hybrid approach towards an integrated regional energy system (sector coupling): Hybrid projects can be expanded and improved by combining them with so-called power conversion technology. This converts electricity into another source of energy, typically gas, to ease transmission or store fuels during periods of oversupply. In combination, hybrid projects and conversion technology can help to avoid onshore grid congestion and supply risks. It will ultimately be essential in establishing an energy system that can integrate significantly more capacity from renewable sources.

Hybrid projects can make a significant contribution to Europe’s energy transition and its decarbonisation. In the shorter term they reduce costs and needed space, while in the longer term they pave the way towards an integrated and future-proof European energy system in the North Seas region.

The entire study by Roland Berger on hybrid offshore projects in the North Seas can be found here.