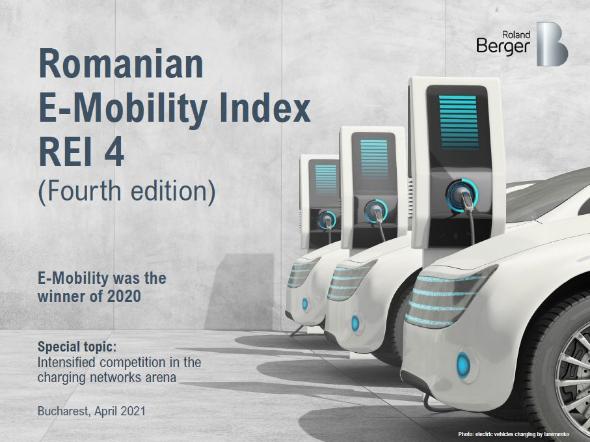 The level of transparency within the e-mobility ecosystem in the Romanian market remains relatively limited. Key questions such as ...

… remain largely unanswered. The Romanian E-Mobility Index (REI), a bi-annual report, aims to bridge this gap related to e-mobility by offering a data-driven perspective, centered around the major developments in the local market as well as related technologies.

The network operator segment is dominated by one specialized player, having a network of 105 charging stations with fast-charge capability in over 80% of the units at the end of 2020. Leading utility players are also actively involved in the market and are in the process of ramping up their charging station networks.

Charging station location owners operate both in partnership with network operators and on their own. Leading retail companies account for approximately 21% of all active charging stations with a presence in 31 counties. In the fuel station segment, the most active oil company has close to 30 fast-charging stations located in 17 counties. Although better positioned to cater to the needs of vehicle owners, fuel stations are generally laggards when it comes to charging infrastructure – Only one in 100 fuel stations belonging to the top three national players offer electric charging capabilities.

Together, station network operators and location owners have driven the market to higher growth rates – The end of 2020 saw a significant increase in the usual 20-30% growth rate per semester, with a 43% increase in the second half of the year. The total number of charging stations edges closer to 700, with one in three stations offering fast-charging capability at the end of the year compared to one in four in previous semesters. The first two ultrafast chargers in Romania were inaugurated in H2 of 2020, providing output of over 150 kW to quickly recharge vehicle batteries.

The approximately 220 new charging stations opened in the second half of the year mostly belong to retailers, malls, car dealerships and public parking facilities. With 60% overall growth, retailers have overtaken the HoReCa segment, where developments were modest in the context of the ongoing COVID-19 crisis.

New xEV registrations rebounded strongly in the second semester, leading to a record year for Romania with almost 3,900 new xEV registrations, a 93% increase compared to 2019. The all-time high number of new xEVs on the roads was bolstered by the partial lifting of lockdown restrictions, but primarily driven by the record level of government incentives. The Rabla Plus program budget amounted to EUR 41 m in 2020, more than double the 2019 level.

In line with the growth trend visible in all major EU countries, the share of new EVs & PHEVs in total new car registrations increased to ~3.9% in the second half of the year.

Following the trend set in the first half of the year, the EV and PHEV offering continues to expand as manufacturer line-ups become increasingly electrified. 44 new xEV models were launched in 2020, doubling the number of models available at the end of 2019. Consumer preference for the SUV segment is reflected in the offering – 40% of the new xEV models launched in 2020 were SUVs.

COVID-19 has been a significant challenge successfully passed by e-mobility – While the automotive sector has suffered, e-mobility has proved its resilience and is visibly on a clear development path; Furthermore, the pledges of policymakers are increasingly strong and signal a downturn for combustion engines.

Traditional energy players should be mindful of this when designing their future strategies – There is an increasing gap in charging station offerings between fuel stations and the leading players from other sectors such as retail or real estate.

About the Romanian E-Mobility Index

REI is a bi-annual report that aims to increase the level of transparency within the e-mobility ecosystem in the Romanian market by implementing a data-driven perspective, centered around the major developments as well as related technologies.

Would you like to know more about the Romanian E-Mobility Index and how companies can profit from the development of e-mobility in Romania? Please don't hesitate to contact our experts Szabolcs Nemes or Dragos Fundulea .

The fourth edition of Romanian E-Moblity Index focuses on the main players active in the charging station industry, both in terms of network operators and main station locations.

E-Mobility booms despite the pandemic

The "E-Mobility Index 2021" shows that the industry is booming. This is due to higher sales figures, increasing production capacities and more models.

The September 2020 edition of the Automotive Disruption Radar shows that the coronavirus hit the automotive industry hard but had little effect on the sector’s shift to autonomous mobility.