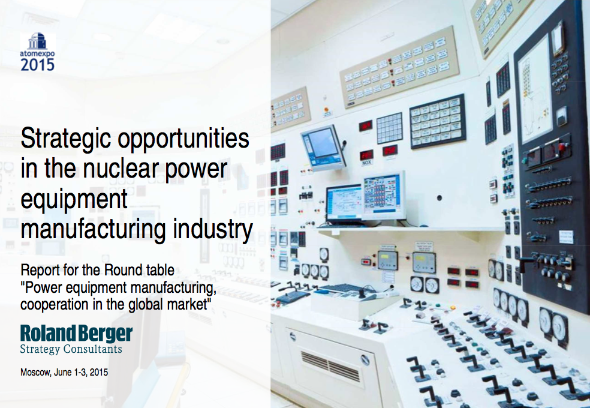 Nuclear energy, along with renewables, is widely considered to be one of the relatively clean energy sources destined to play an increasing role in the global energy mix. Despite being largely conservative e.g. when it comes to safety, it is nowadays on the verge of a set of technological breakthroughs as well as significant changes to conventional business models.

In this regard the representative of RBSC's Moscow office Denis Borisov was invited to give a speech on our company's view of the future of international nuclear power at the annual Atom Expo congress held in Moscow on June 1-3, 2015, along with other high-profile speakers represented by executives of numerous international institutions, governmental bodies, scientific world and business community, including WNA, IAEA, Ministry of Industry of Russia, Russian Academy of Sciences, Rosatom, Power Machines, Siemens, Alstom and Mitsubishi Heavy Industries.

The document presented during the event was dedicated to the strategic opportunities in the nuclear power equipment manufacturing industry in the next 10-15 years, comprised both the technological and commercial perspectives and was based on the RB project experience in Russia, Germany, France, China and other key nuclear markets.

Small modular nuclear reactors (SMRs) are another opportunity, potentially a real "game-changer", for which the market is now at the stage of conceptual design / licensing / first-of-a-kind plants construction (depending whether an SMR belongs to Generation III or Generation IV), with first commercial units expected to come online after 2020.

At the end of the speech Denis emphasized the fundamentally limited flexibility of NPP capacity load and the associated need for greater power supply flexibility, envisioned to be achieved via wider usage of energy storage solutions, especially those well suited for large-capacity applications, i.e. hydro-pumped storage, compressed air storage and power-to-gas.

Report for the Round table "Power equipment manufacturing, cooperation in the global market"