"Smart City" has been an agenda item for many years now, but most cities lack a holistic and broad enough approach – multibillion-dollar market to be created

What is a smart city? From elementary schools teaching app programming to algorithms coordinating hospitals and vaccination capacities, "smart" knows no boundaries. But what is really going on in cities keen to embrace digitization? In keeping with its mission statement, navigating complexity, this is what Roland Berger's new, groundbreaking Smart City Strategy Index sought to find out by putting 87 conurbations across the globe under the microscope.

According to Thilo Zelt, Partner within the Civil Economics, Energy and Infrastructure Competence Center at Roland Berger's Berlin office, the index revealed good news and one surprising fact. First the good news: "More and more cities are taking a strategic approach to becoming smart with over half of the smart city strategies in our study having been developed since 2014." Less encouraging, as Zelt adds, "is the patchiness of cities' responses to actually implementing smart approaches." Out of a maximum score of 100, the average achieved was 37 and only 19 of the 87 cities scored over 50. How did this come about?

The whole is greater than the sum of its parts

The index divides a smart strategy into three areas; action fields, strategic planning and infrastructure. The top performing cities, Vienna with 73 points and Chicago and Singapore both with 72 points, achieve good results in all three areas and put some considerable distance between themselves and the other participants. A smart city strategy ideally covers six interrelated action fields consisting of government, health, education, energy and environment, buildings and mobility. Emphasis is often laid on mobility, energy supply and public access to government services and while this is clearly a good thing to get the smart ball rolling, the downside is that education, buildings and health are often neglected.

Top performing cities are neither big nor rich – they're just smart. Take Vienna for example. The Austrian capital ticks the boxes, having produced a well-focused smart city strategy – however, where it really sets itself apart from the majority of cities surveyed is in its clear short-term, medium-term and long-term goals for digitization. This extends to actively encouraging sponsorship of smart city activities by companies and pilot projects run as showcases for both the city and the wider national economy. Second placed Chicago too has a particularly proactive approach to education, with digital literacy training and a network of 250 free-of-charge computer labs spread across the city.

At the other end of the size scale, cities such as Santander in Spain have extremely well-balanced strategies in place. While wealthier cities tend to come up with slightly better strategies, there are notable examples where cities with limited economic power are developing highly useful strategies, such as Rio de Janeiro in Brazil.

It is not just cities and their inhabitants that will be able to benefit from smart strategies. Companies supplying smart cities with the required technology and services to enable smart processes to operate have been guilty of a fragmentary approach to business to date. A more all-embracing approach such as that adopted by the big global players can help in the provision of solutions ranging from smart parking to digital communities. And it makes financial sense, this being a market that will more than double in size to USD 28 bn between now and 2023.

In order to develop the kind of comprehensive smart strategy outlined above, Roland Berger has identified 10 key pointers. The first step is to reevaluate the role of the city and its administration, introducing preemptive services instead of leaving the onus on citizens to act. And it is crucial to understand what the population of a city actually wants. Then, think holistically with regard to services and look to foster cross-sector activities. Next, actively encourage buy-in from the private sector. It is important to have an open data policy with regard to public information. Provide business incubators to encourage innovators and entrepreneurs. It goes without saying that open data needs to be matched with a cyber-security concept up to the job. Empower infrastructure operators by bringing them onboard when designing, financing and implementing new initiatives. Generate support from political bodies and foster dialogue with the population. Finally, in order to ensure that any smart strategy is properly managed from the outset, establish a coordinating body and a dedicated planning system. In the words of Roland Berger Partner Zelt, "Cities need to develop a comprehensive end-to-end approach. The Smart City Strategy Index gives them exactly that."

The rise of the smart city 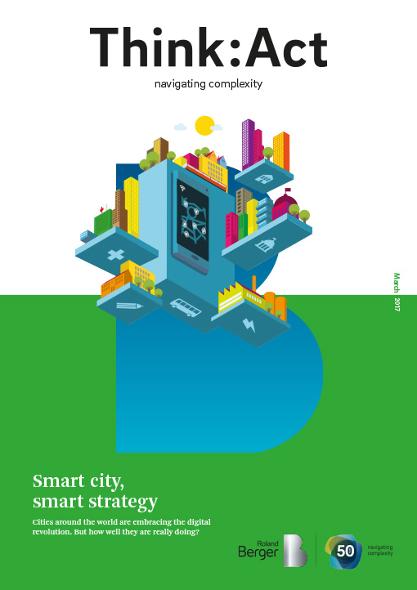 Cities around the world are embracing the digital revolution. But how well are they really doing?