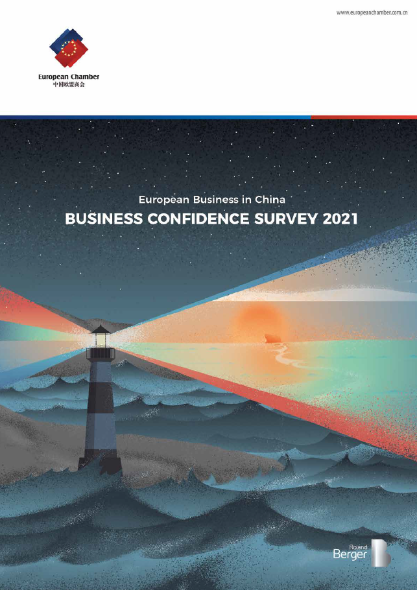 Despite COVID-19, European companies enjoy a resurgent market in China

China's markets remained resilient during 2020, providing much-needed shelter for European companies amidst the storm of the COVID-19 pandemic. Revenue trended only slightly downward, with a majority of European companies either maintaining their year-on-year revenue or increasing it slightly. Despite the challenges, companies remain optimistic about near-term growth in China, and the number of European companies looking to expand their business in China has increased.

The annual European Business in China Business Confidence Survey conducted by the European Union Chamber of Commerce in China (EUCCC) in cooperation with Roland Berger investigates how European companies feel about the business environment in China. Its latest report is published in June 2021. We look at some of the key findings below.

The news of the COVID-19 pandemic initially spread a mood of gloom among European companies operating in China. A joint survey of members of the European and German Chambers of Commerce in China in February 2020 found that almost two-thirds of respondents were expecting to see revenues fall year-on-year. At the time, companies spoke of making their global supply chains resilient and diversifying into other markets.

But contrary to expectations, European companies in China found themselves in a resurgent market in 2020. In the European Business in China Business Confidence Survey (BCS), 42 percent of respondents saw revenues increase in 2020, with the biggest surges in business-to-consumer (B2C) industries, such as retail and automotive. This was largely thanks to Chinese customers who, unable to travel, instead spent their disposable income on cars, cosmetics and clothing.

Ultimately, three out of four companies ended the year with a positive earnings before interest and tax (EBIT), the same share as have been profitable for the last five years. China became a critical pillar in the global operations of many European multinationals, with just over half of companies reporting that their EBIT margins in China were higher than their worldwide average. Looking forward, more than two-thirds of European companies in China are optimistic about future growth – a significant increase compared to the previous year.

Inevitably, the pandemic took its toll on the foreign employees of European companies in China. COVID-related travel restrictions negatively impacted three-quarters of respondents in the survey. Some foreign experts are still stranded outside of the country and may end up not returning to China at all – a long-term challenge to companies, as this would mean that years of China-expertise would be lost.

European companies are now shifting strategies to address the coming storms. In 2021, respondents reported that they are building resilience within China to secure their position in the market. Over a quarter of manufacturers are onshoring their supply chains, five times as many as are offshoring. Meanwhile, 27% of companies in joint ventures have increased their positions, with 18% taking a controlling share and 2% buying their partner out entirely. This is not just chasing the growth potential of China's economic recovery: It is long-term thinking on how to remain in this critical market and build scale.

Many of the obstacles facing European companies in China are long-standing. Market access is improving only slowly, and many survey respondents report unequal treatment compared to local firms. Almost half of respondents expect state-owned enterprises to gain opportunities at the expense of the private sector. Respondents also complained about regulatory requirements regarding "critical information infrastructure" and "autonomous and controllable technology", although 2021 also marks the first time that a majority of respondents found intellectual property right enforcement to be "adequate" or "excellent".

" European firms are bracing for a challenging future. Yet , the importance of the China market has never been clearer. "

Despite COVID-19, European companies enjoy a resurgent market in China

China's markets were resilient during 2020, providing shelter for European firms during COVID-19. The 2021 EUCCC survey finds optimism in the face of challenges.