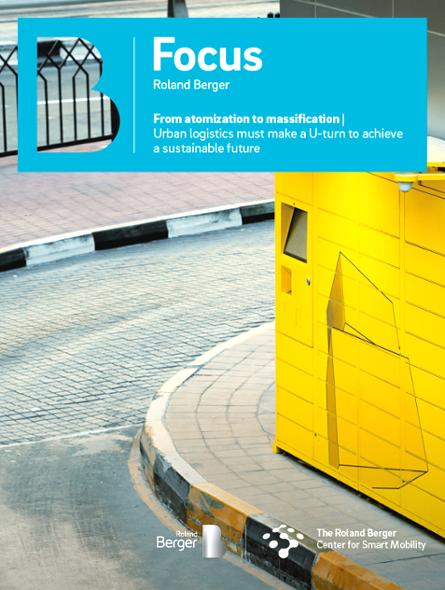 Urban logistics: From atomization to massification

Spurred on by the Covid-19 pandemic, consumers increasingly expect ordered items to be delivered as fast as possible and at affordable prices. Convenience is becoming the order of the day. Global e-commerce sales have been booming and the market is expected to continue growing around 9% annually over the coming years. To meet these demands, logistics operators have “atomized” deliveries (i.e., fulfilling orders in fragments), which in addition to increasing complexities and costs, has also led to an overtaxed urban infrastructure and rising emissions. Roland Berger’s latest study, “From atomization to massification | Urban logistics must make a U-turn to achieve a sustainable future”, explores how a sustained collaboration between all involved stakeholders – from logistics operators to infrastructure providers and more - may be the only way to relieve the pressure placed on city infrastructures while ensuring that customer demands are met in a timely yet sustainable manner.

The rising problem of atomization

Around 56% of online consumers aged 18-34 years now expect same-day delivery of items. Meanwhile, the number of customers and product categories are also increasing, with demand becoming ever more volatile. Logistics players, faced with shifting consumer behaviors, have had to adapt, driving to the rise in items being delivered in an atomized fashion, which in turn leads to a new set of challenges.

It is not only the business-to-consumer (B2C) market that is plagued by this issue. With the business-to-business (B2B) sector too seeing a surge in e-commerce, and customers expecting the same level of service as in their private dealings, logistics operators have had to ensure delivery speed and convenience leading to increased complexities and rising costs. While it remains to be seen whether B2B e-commerce will become as atomized as B2C, its impact is already being felt.

If steps are not taken to address the increase of atomization, delivery costs are likely to rise in parallel with customer expectations with the additional costs inevitably being passed onto customers who may then be driven to avoid services such as same-deliveries altogether in order to save money. Consumers in Sweden, for example, have already been found unwilling to pay for home delivery of online food – a trend that could eventually reduce the pressure on the urban logistics ecosystem.

Isolated solutions exist, but they are not enough

Several players are already trying to find solutions to ease the pressure faced by urban logistics. However, most of these efforts are focused on addressing the immediate challenges faced by specific players instead of a concerted approach to transform the entire ecosystem. For example, some logistics players have already adopted purpose-built vehicles (PBVs) to optimize deliveries. These vehicles, also called a “container on wheels”, reduce the steps needed to collect and deliver parcels and have the potential to reduce a fleet of traditional delivery vehicles by 10-15%. While this would benefit the environment by reducing carbon emissions as well as traffic congestion within cities, it will not alleviate the increasing pressure on urban logistics itself. Several other innovative efforts in the areas of freight technology and new vehicles are also underway in different parts of the globe, but none so far have gained wider traction.

Three different scenarios for the future

Three different scenarios exist if atomization continues to grow. In the first one, retail giants prevail - investing in new buildings, infrastructure and software will allow them to offer even more convenient and faster delivery options while still keeping costs under control. This scenario is likely to have a strong impact impact on cities, logistics operators and consumers, who may have to adapt to the rules and regulations of the retailer. In the second scenario, government bodies introduce regulations that enforce a bundling of flows, or massification, leading to several issues for urban logistics operators including obstacles when it comes to introducing new innovations and services. Finally, in the third scenario: stakeholders in the ecosystem massify by combining their delivery efforts. Logistics players would save time and money through bundled deliveries and optimized processes, consumers would get convenient, cheaper deliveries and urban pollution would considerably decrease. This is the most optimal scenario for everyone involved as it creates an equilibrium that benefits all stakeholders: sound competition exists between logistics players, governing bodies are able to influence the system but not overregulate it and consumer expectations are consistently met.

But how can stakeholders collaborate?

To ensure massification, different stakeholders need to come together and take action. For example, logistics operators could share facilities and pool flows in a reduced number of warehouses, while city authorities should incentivize the pooling of flows of goods. Consumers should be encouraged to become a more active part of the delivery experience, with certain behaviors being incentivized, such as receiving parcels on a specific day or at a specific time. Vehicle manufacturers (OEMs) can develop purpose-built vehicles (PBVs) that are designed specifically for urban logistics, and which combine high storage capacity, autonomy, speed and suitability.

What the future holds in store

The massification of urban logistics is likely inevitable. Already, logistics operators are consolidating as a result of rapid atomization and consumer demand evolution. As these players grow and acquire greater financial and operational resources, they may massify in the most profitable geographic areas – a version of the first scenario – but with logistics providers playing the “giant” role rather than large retailers. Alternatively, once they have acquired their competitors and thus limited their competition, logistics operators may prefer the third scenario where collaboration comes into play. The risk, however, is that they fail to do either and the second scenario kicks in - where cities and regulators take the lead.

Learn more about how logistics players can address the increasing challenges posed by atomization and still meet customer demands in Roland Berger’s study.

Urban logistics: From atomization to massification

To meet growing customer demands for delivery speed and cost, urban logistics turned to “atomization.” This is no longer sustainable and logistics players risk bowing down to city regulations. Roland Berger explains how to avoid this.

Designing urban logistics for the future

Urban logistics play a key role in the evolution of our future cities. A platform solution with genuine integration of the whole system could help create efficient urban logistics.

Logistics in the space between crisis and structural change: Digitalization and end-to-end logistics for more resilience and efficiency in global supply chains.

The retail transformation – New strategies for the future

How retail can protect its future

Smart Mobility contributes to a more sustainable and value-adding state of mobility. Learn more about new mobility scenarios for our society here.