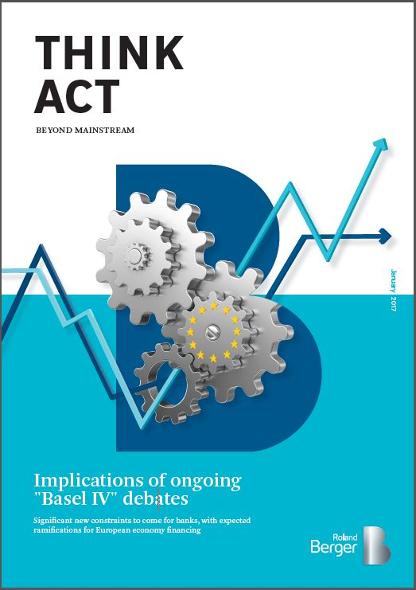 The study "Implications of ongoing Basel IV debates: Significant new constraints to come for banks, with expected ramifications for European economy financing" is part of the ongoing discussions at Basel Committee level - in particular following the meeting held in Santiago de Chile in late November 2016.

The various reforms introduced since the financial crisis of 2008 have led to very significant efforts by banks to strengthen their own funds (+ 80% of CET1 capital over the 2009-15 period in aggregate for the 23 G-SIBs in Europe and the United States) thereby strengthening the sector resilience.

At the same time, banking institutions showed opposite trajectories in terms of profitability in Europe and the United States (respectively -9% vs. + 10% RoAE per year for G-SIBs) while their contributions to the financing of the economy are reversed (76% vs. 27%).

The new amendments put forward by the Basel Committee ("Basel IV" discussions) modify in depth the rules for calculating capital requirements and will therefore have a significant impact with ranges of increases of RWAs going on average from 20 to 40% across institutions in Europe.

It is clear that large disparities will be observed between banks and that European institutions should be more affected than their American counterparts (taking into account differences in the structure of bank balance sheets between the two markets, in particular as a result of the treatment of mortgages).

Banks, in particular in Europe, will have to review their size and balance sheet structure with impacts on the financing model of the economy (including their direct contribution).