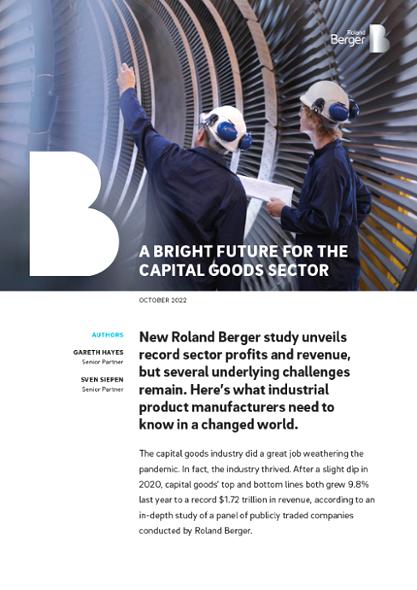 A bright future for the capital goods sector

By Gareth Hayes and Sven Siepen

The capital goods industry did a great job weathering the pandemic. In fact, the industry thrived. After a slight dip in 2020, capital goods’ top and bottom lines both grew 9.8% last year to realize a record $1.72 trillion in revenue, according to an in-depth study of a panel of publicly traded companies conducted by Roland Berger.

EBITDA grew to a recent record of 14.7% for the same period. While that’s exciting news, we believe 2021 could be an outlier and is definitely a transitional year as COVID ground from pandemic to endemic and the industrial world came out of hibernation to a rapidly changing reality.

Coming out of the pandemic, capital goods manufacturers face significant disruptions that are changing traditional operations, including the effects of deglobalization, digital technology, sustainability, and integrated solutions.

As with all industries, experts were unsure how global lockdowns would affect the capital goods sector. Thankfully, manufacturers' top line grew almost 10% in 2021, according to our study, after only a single year of declines.

But regional recovery and performance differed significantly. North America and China, for instance, experienced dramatic 15-20% growth last year. At the same time, more conservative Europe and Asia Pacific grew at a modest 3-4% in 2021. Here we can see that those who heavily invested in post-crisis recovery did significantly better than those who did not.

We do not expect a sustained repeat of last year’s high industry growth and profitability. There is an ongoing management of backlogs and an inflation-tinged supply chain supply-and-demand boost that are transitory – maybe not too short term but transitory, nonetheless. In order to keep growing, manufacturers must turn their attention to the emerging trends that are reshaping the industry. They must understand what separates the winners from what we call “profitless growers, cash generators, and underperformers.”

Looking back at recent history, the “Great Recession” of 2008-2009 is the only crisis that compares to COVID-19. But the latter has been dubbed a “once-in-a-century crisis.” Nevertheless, capital goods enjoyed a quick recovery in both top and bottom lines, then a return to normal in just a single year. That said, the pandemic fundamentally changed how society lives, works and plays.

To understand how successful companies handled the crisis, what strategic actions they took, and how they laid the foundation for profitable growth, we analyzed the financial performance of capital goods manufacturers over the last three years. In doing so, we identified several repeatable best practices.

Based on invested capital, return on invested capital (ROIC) and weighted cost of capital (WACC), we were able to distinguish four groups of capital goods manufacturers: profitless growers, underperformers, cash generators, and winners. What we found: there are winners across the globe with regional differences in prioritizing growth and profit through the pandemic.

More specifically, our analysis shows that winners exist across regions with the greatest relative share in China, which benefited from the fastest recovery from the first waves of Covid-19. European companies did not invest as much through the pandemic, as shown by 3% of companies categorized as profitless growers.

Those that did invest performed well with 33% share of EU companies classified as “winners.” Generally speaking, the EU prioritized profits over growth, with companies categorized as winners and cash generators representing over 50% of the region.

In contrast, Chinese companies continued to prioritize growth with winners and profitless growers representing over 75% of the region. There were few cash generators at 4%, which indicates a continued growth mindset for the region. North America had a relatively even blend and equal prioritization of profits and growth with each segment having similar company splits. In our study, APAC had the highest share of underperformers.

Overall, Europe and Asia Pacific experienced a significantly higher number of “underperformers” when compared to China and the US. The same is true for market cap, which underscores the sometimes conversative business culture of both Europe and Asia Pacific. The balance between aggression and conservatism in times of change is critical. Coming out of COVID and in light of the size of the transformation in front of the industrial world, stasis could prove irrecoverably destructive.

After studying the financials and best practices of the largest capital goods suppliers from around the world, researchers at Roland Berger identified four characteristics that “winning” manufacturers all have in common. In our view, this is what allowed successful manufacturers to quickly thrive post-pandemic, and conversely why underperformers faltered:

The combination of these factors varies across successful companies but exist in some measure within all. Evergreen characteristics such as these create the bedrock upon which adaptation to what, for many, amounts to a sea change shift in megatrends.

Strategic coherence was particularly important during the pandemic. While many manufacturers showed strong results as the market rebounded, winning manufacturers optimized for the future by investing in new growth opportunities, even while managing their response to the crisis. Starting from strong first principles allowed for intelligent investment and smart adjustments to the core strategy.

Despite unfamiliar circumstances of the pandemic, winning capital goods companies quickly redeployed their capital assets when lockdowns lifted, this after first safeguarding capital at the onset of the pandemic. This linking of strategic coherence with a proven ability to execute was critical during the pandemic. Winners moved quickly and with discipline to come out the other side stronger than they went in.

These four emerging trends are expected to influence capital goods manufacturers differently depending on the region. For example, we predict deglobalization will have a higher and more immediate impact on American, European, and Chinese capital goods, but not as much on Asian Pacific ones.

The manufacturing Winners of tomorrow will be companies that combine excellence against the evergreen Winners characteristics with a keen eye on the most critical megatrends. We are in a time of great change – punctuated but also obscured by COVID. The megatrends that were in the background as manufacturers navigated the long recovery from the 2008 Great Recession are now front-and-center. Two years of navigating pandemic didn't slow the advance.

We believe tomorrow’s winners will continue to invest, something US and Chinese players did well, as a group, through the pandemic. The rest of the world – European companies in particular – must, and will, respond.

Without a doubt, COVID-19 reshuffled the deck in terms of “winning” manufacturers and regions. But the long-term picture remains the same: tomorrow’s industrial winners will meet the great challenge of our time – climate change – and continue to profitable progress through innovation.

After more than two years of pandemic-driven uncertainty we exit COVID to further evidence of the truth in the old Greek adage that the only constant is change. Change creates opportunity and as we look forward to 2023 we see a door wide open for new winners to emerge as they adapt first or best to what the future holds.

Register now to download the full publication on how companies in the capital goods sector can embrace a changed world for a bright future.

No turning back: How global disruptions changed manufacturing

A deep dive into the impact of the crisis on various industries and markets.

Multiple trends and crises are changing the face of the industry. How machinery and plant engineering firms are shaping their future and becoming more competitive

Logistics in the space between crisis and structural change: Digitalization and end-to-end logistics for more resilience and efficiency in global supply chains.

Roland Berger has developed a wide range of future-oriented consulting services for manufacturers on the road to Next Generation Manufacturing.