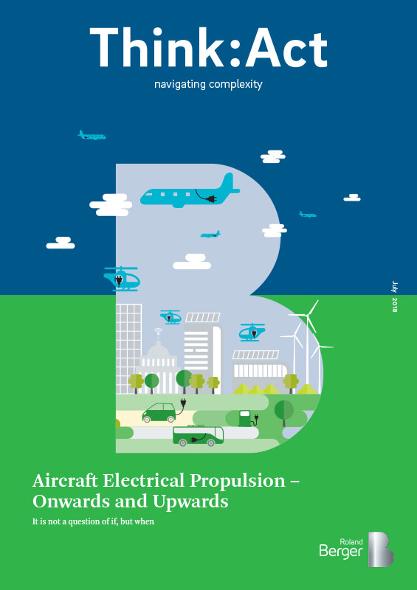 The first >50 seat hybrid-electric aircraft will enter fare-paying passenger service by 2032, according to Roland Berger's panel of aerospace experts. The early 2030s is also when original equipment manufacturers are expected to bring into service their next major narrowbody aircraft. Original equipment manufacturers will soon need to decide whether to invest in new aircraft with conventional propulsion systems, which may quickly become obsolete, or take the leap to bring new electric technology to market.

Electrical propulsion in aerospace is expected to usher in a new era of low noise, low emissions and potentially even safer, flight. The pace of development in the field is gaining speed, with roughly 100 different electric aircraft programs in development worldwide – up 30% since 2017, and more than double the number in 2016. Though technological and regulatory hurdles remain, once overcome, electrical propulsion will impact company business models, aircraft architecture and even city planning.

To make the electric dream a reality, the industry must close the technology gap to electrical propulsion, which is primarily defined by the power output required for flight. Output varies by platform type, which include general aviation aircraft, urban air taxis, regional aircraft and large commercial aircraft.

The technologies required for power output for general aviation are broadly available today, but what’s needed for electrical propulsion in large commercial aircraft and even regional aviation must still be developed. Challenges include battery technology, electric motors, generators (for hybrid-electric architectures), high voltage wiring and power electronics, among others.

Technology is progressing quickly on one front: The cost of a lithium-ion battery pack is expected to decline by 60 percent by 2030, in part due to capacity growth for batteries used by the automotive industry. However, with so much attention on the automotive industry, the aerospace industry will need to put pressure on developers to make lithium-ion batteries that are better suited for the higher gravimetric density needed in aerospace.

Aviation’s share of global greenhouse gas emissions is forecast to skyrocket by mid-century. So far, international aviation has been left out of UN agreements on climate change, such as the Kyoto Protocol and the COP21 Paris Agreement. The industry's UN-regulator, the International Civil Aviation Organization (ICAO), has only set up a carbon offset scheme (CORSIA) which has the potential to reduce net emissions, but only by transferring the emissions – and cost – outside of the industry.

Electrical propulsion offers an opportunity to constrain aviation's CO2 emissions to current levels of between two and three percent. To achieve this, not only would electric aircraft have to become the norm, but regulation would have to incentivise early retirement and replacement of today's fleet - a move that would have dramatic repercussions for the aircraft leasing industry.

China could play a leading role in an electrically propelled future, due to its combination of investment in technology, consumer demand, regulation, and current lack of incumbency in aerospace. Already a world-leader in electric vehicle technology, China manufactured around 50 percent of all electric vehicles in 2017. If China were to adopt the same coordinated approach to electrically propelled aircraft, the results could directly challenge established Western aerospace companies.

The study also includes a series of interviews with leading aerospace and aviation industry figures, including:

The opportunity presented by electrical propulsion may change the arithmetic for the industry and allow aviation to go through an energy transition self-sufficiently, without a requirement for a carbon offset. However, the consequences of such a rapid transition would have far reaching effects – aircraft manufacturers and their suppliers would need to invest heavily in new generations of electrically-propelled aircraft, while the residual values of aircraft already in service would collapse. Developments in electrical propulsion will remake the face of the aerospace industry – the time to act is now.

Urban Air Mobility – an industry takes off. Investments are over 20 times higher than four years ago.

Electrical aircraft propulsion is set to bring in a new era of low noise, low emissions and potentially even safer flight. Explore our analysis on electrical propulsion.

How will the industry evolve due to electric propulsion? How will electric propulsion impact your company? We invite you to contact us at EP@rolandberger.com , or connect with Robert Thomson or Nikhil Sachdeva via LinkedIn to discuss your thoughts.

Interested in finding out more about exciting developments in the field of electrical propulsion? Register here to receive the latest updates delivered straight to your inbox.