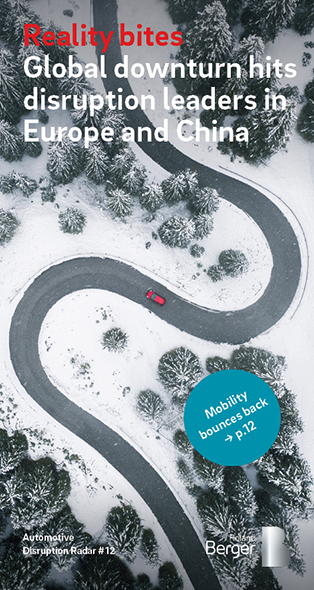 Also in this edition: Car-as-a-service models and mobility’s post-Covid comeback

It’s all change at the top of the latest edition of the Automotive Disruption Radar after a tumultuous few months of world events. Covid-related restrictions and supply chain issues pushed previous leaders China and the Netherlands down the rankings, but several countries, including new leader Singapore and India, posted big improvements. Here we outline the results, as well as the focus subjects in the full ADR12 report, which include car-as-a-service-models and the post-Covid return of mobility solutions.

In a reflection of the strong headwinds facing the European and Chinese auto industries, Singapore has leapfrogged China and the Netherlands to take pole position in the Automotive Disruption Radar. The island state achieved a record-equaling score of 68.5% in the latest edition of the twice-yearly survey, securing top spot for the first time.

The current plethora of negative global events, such as the energy crisis, supply-chain bottlenecks, Covid fallout, soaring inflation and the war in Europe, weighed heavily on the previous leaders. China and the Netherlands saw their scores fall by 2%, with Covid-related lockdown measures having a particularly large impact on Chinese production and use of multi-modal mobility. Logistical problems, especially involving supply chains originating in China, were the main drag on the scores of the Netherlands and other European countries. The global semi-conductor shortage compounded the difficulties, the ADR12 report found.

But there was good news in other areas of the report, which tracks 26 automotive disruption indicators across 22 countries. While Singapore scored highly due to its strong performance in the mobility indicators, 5G coverage and high proportion of shared vehicles, several countries were boosted by the growing trend for electrification. For example, sales of electrified vehicles (BEV & PHEV) in Norway now make up 76% of all vehicle sales, with Sweden on 48%, the Netherlands on 27% and Germany and China on 23%. The Netherlands also scored highly on charging infrastructure and autonomous driving indicators.

Away from the top five, several countries showed strong improvement in the face of the global headwinds. Saudi Arabia benefitted from heavy investment in electrification, while India jumped three places in the rankings from 18th to 15th thanks to its increased EV sales and EV portfolio, improved 5G coverage and the opening of the country’s first autonomous driving test track. Other ADR markets were boosted by new regulations to improve air quality and clamp down on internal combustion engines (ICEs). India and the Italian cities of Rome and Milan, for example, all plan to introduce restrictions on the most heavily-polluting vehicles in 2022.

The twelfth edition of the ADR includes analyses of four topical disruption themes, as well as a detailed assessment of the rankings and countries’ performances. Below is an overview of each – more details can be found in the full ADR12 report.

The use of new car-as-a-service (CaaS) models is growing. These offer customers the opportunity to pay a monthly subscription fee for a car rather than owning it. The service is all-inclusive, with insurance, maintenance and other services, sometimes even fuel, included.

To find out more about their potential impact, the ADR survey asked respondents whether they would consider a car-as-a-service model. In the latest edition, 57% answered yes, an increase of 11% on ADR6 in 2019. This and other findings suggest there is strong customer demand for CaaS solutions and may indicate that the relevance of traditional car sales channels is in decline.

Demand for mobility solutions, such as ride hailing, e-scooters and public transport, collapsed during peak episodes of the Covid-19 pandemic as people opted to use their own transport to avoid infection. But with the pandemic now subsiding, mobility is making a comeback.

The latest ADR survey found that 65% of people know at least one person who gave up their car in favor of other transport modes, against 55% in January 2020. The mobility behavior indicator, which measures distance traveled by transport mode, also pointed towards a turnaround. The driving-in-a private-car share fell by 2% compared to ADR11, whereas distance traveled by public transport and mobility modes both increased by 1%. Results from prominent demand-driven mobility companies, such as Uber, Lime and Didi, largely reflect these findings. These are outlined in the full ADR12 report, along with evidence to suggest that the strong growth in the mobility market could one day spell the end of private car ownership.

While a decisive breakthrough in autonomous driving (AD) has long been talked about, ADR12 finds that the technology remains stalled. Computing power and regulation are still the key barriers. Level 5 fully autonomous driving requires a significant leap in computing power, and while two AD-specific semiconductors have been announced, both are unproven and will not be available until 2025.

Regarding regulation, type approval and insurance concerns still need to be addressed. However, considerable progress has been made. In South Korea, for example, the government revised the safety standards of Level 3 autonomous vehicles, with the local OEM now due to commercialize the first Level 3 vehicle in late 2022.

In the ongoing battle between the established automotive OEMs and new industry players, autonomous driving remains the key target. ADR12 notes that new players continue to make headway here, while traditional OEMs are increasingly moving into the mobility market, having not previously been big players. OEMs are also making record profits, while the share price of many aspiring companies in the mobility and AD sectors has fallen. While it will be challenging for OEMs to compete against Silicon Valley’s tech giants, it’s clear that they remain in the automotive disruption race.

Find out which impact the rise of new Chinese EV makers could have on traditional OEMs on the global automotive market.

In the 10th edition, we highlight the changes in the industry since 2017, especially around electrification, as well as provide the usual in-depth analysis of the current state of play

Computer on Wheels: A new role for Tier 1 suppliers

Learn more about how software platforms are disrupting the automotive industry, especially Tier 1 suppliers, and how this affects the automotive value chain.