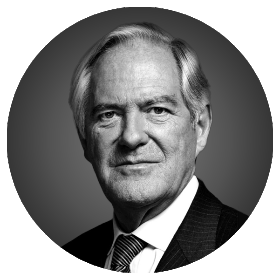 Prof. Dr. h.c. Roland Berger has seen his company grow to become one of the world's top five business consulting firms. From its foundation in 1967, he led the company as CEO, continued as the Chairman of the Supervisory Board from 2003 and is the company's Honorary Chairman from 2010 to 2020. Prior to founding his strategy consultancy, he studied business administration in Hamburg and Munich, and was employed as a consultant and ultimately a Partner at a leading American consulting firm based in Milan and Boston.

He has been appointed to expert commissions by several German state governments and Germany's federal government. From 2007 until its dissolution after the publication of the final report in 2014, he was a member of the High Level Group on Administrative Burdens under the leadership of former Bavarian State Premier Dr. Edmund Stoiber, appointed by the European Commission. In 2012, he was appointed to the Oxford Martin Commission for Future Generations.

Since 2002, he has served on the Business Advisory Council of the State Premier of Saxony-Anhalt and was appointed to the Globalization Council Portugal by the Portuguese President, Aníbal Cavaco Silva. Former German President Roman Herzog appointed him to the President's Advisory Council for Innovation and he has also actively participated in over 20 federal government commissions under the German chancellors Helmut Kohl and Gerhard Schröder.

He is a Member of several supervisory boards and advisory councils of national and international companies, foundations and organizations, and personally invests in many private and listed companies as well as startups. He was Honorary Consul General of the Republic of Finland in Bavaria and Thuringia from 1996 to 2015 and has served as the Honorary Consul of the Republic of Singapore in Munich since 2015.

In 2008, he set up the Roland Berger Foundation with an endowment of EUR 50 million. The Foundation, whose Board of Trustees he chairs, is dedicated to the global protection of human dignity and human rights. Each year it confers the Roland Berger Award for Human Dignity and helps gifted children and young people from underprivileged families across Germany and Italy to gain access to the best possible primary and secondary education, allowing them to pass the entrance requirements for a university degree. Since 2015, the fund has also supported unaccompanied minors who came to Germany as refugees.