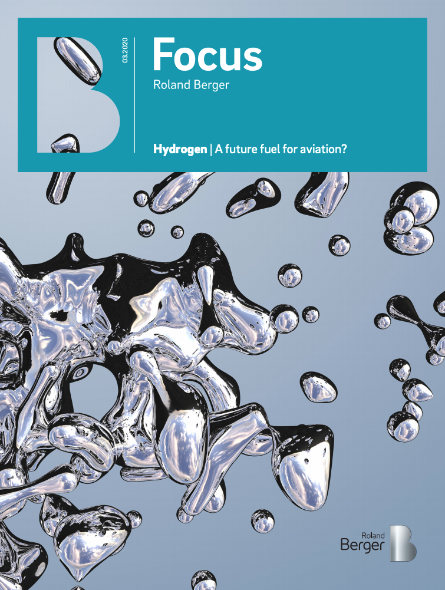 The aviation industry is currently responsible for three percent of global CO2 emissions. However, Roland Berger's forecast suggests that if other industries de-carbonize in line with some projections, aviation could account for up to 24% of global emissions by 2050 unless there is a significant technological shift. Several solutions are under consideration, from sustainable aviation fuels (SAFs) to electric aircraft, to hydrogen propulsion. Roland Berger’s study, “Hydrogen: A future fuel for aviation?” assesses hydrogen’s potential as a greener mode of propulsion and discusses the major challenges for its adoption.

The study finds that there are five broad ways in which the aviation industry’s emissions can be reduced. These range from incremental evolutionary improvements, to net-zero solutions (such as SAFs), to “true zero” solutions, which have no impact on the environment at all. Unsurprisingly, the methods that offer the greatest emissions reductions also present the most complex challenges.

Relative to conventional fuels and SAFs, hydrogen is superior because it removes carbon dioxide emissions entirely, but also has the potential to reduce other GHG emissions. Relative to batteries, hydrogen has a superior energy density, both in gravimetric and volumetric measures. Additionally, hydrogen is likely to penetrate into other industries, which could speed up the development of fuel cells and storage systems, promote downstream infrastructure and push down supply chain costs.

Two main options for hydrogen-fueled aircraft exist. In hydrogen combustion aircraft, thrust is generated through the combustion of hydrogen in a modified jet engine, which eliminates most but not all GHG emissions. Overall, the transition would require less aircraft and engine redesign than hydrogen fuel cell propulsion, making it somewhat less disruptive to the current setup of the aerospace industry.

Hydrogen fuel cell (HFC) aircraft could offer a “true zero” solution for GHG emissions as the only output of fuel cells is water vapor, the impact of which can be minimized through careful aircraft operation. Studies indicate that hydrogen fuel cell aircraft would be 20-40 percent more efficient than hydrogen combustion designs. Furthermore, a fuel cell aircraft would share many attributes with electrically-propelled aircraft, such as electric motors, thereby benefiting from compatibility with the rapidly developing electric powertrain supply chain.

In order for hydrogen technology to become a viable solution, the aviation industry requires:

Comparing hydrogen's advantages and drawbacks against other sustainable aviation technologies, it will likely be the all-important narrowbody/Middle-of-the-Market sector where hydrogen will be a strong candidate for future propulsion. In this category, OEMs will have to prove that it is more viable than hybrid-electric solutions, and airlines will have to verify that the cost of adopting this technology is justified amid growing sustainability concerns.

Alongside electrical propulsion and SAFs, the authors of Roland Berger's study see a clear role for hydrogen in helping address the challenge of sustainable aviation and recommend that executives allocate resources to ensure its potential is explored.

Hydrogen has emerged as a key contender in the battle to secure a sustainable future for aviation.

Study
Backlogs and balancing acts in the aerospace and defense industry