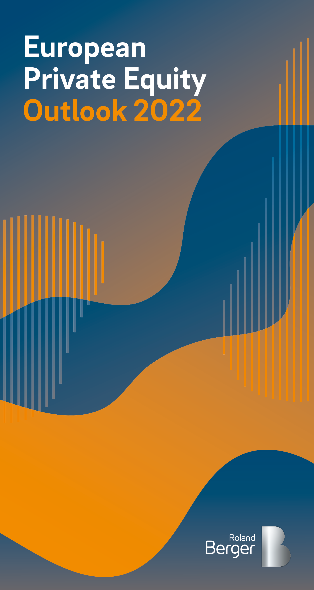 By Christof Huth and Thorsten Groth

ESG criteria more important; small and mid-cap deals seen as the most promising

Europe's private equity industry agrees that the most attractive business prospects this year are in the technology and healthcare sectors. Their positive growth prospects and high resistance to crises are key factors. The topic of the century, sustainability, is becoming increasingly important.

Europe’s private equity sector counted almost 2,000 transactions in 2021 – more than ever before in the previous 20 years. What is especially noteworthy is the optimistic outlook of the European private equity experts surveyed by Roland Berger at the end of 2021 on the prospects for the future: in the view of most specialists, 2022 will continue to offer attractive investment opportunities. They predicted that the most attractive prospects would lie, in particular, in the technology, media, and software sector (85%); followed by pharma and health (77%), and business-related services and logistics (65%). These figures are revealed in the European Private Equity Outlook 2022, which Roland Berger is now publishing for the 13th time since 2010.

In the view of the specialists, the continuing positive business prospects in these three sectors are due to their relative crisis resilience and comparatively high fundamental growth opportunities. The specialists also took an optimistic view of 2022 across the board: according to the survey, 63% of the specialists – almost two out of three – expected a continued rise in the number of M&A transactions involving private equity this year.

These sectors are also generally less affected by the repercussions of the war in Ukraine, so that a high level of activity can still be expected here, according to Roland Berger's PE experts.

With regard to the various target markets within Europe, however, the survey reveals a marked divergence in predictions. The specialists expect to see the most significant growth from the previous year in the PE markets in Spain and Portugal (3.7%), Scandinavia (3.5%) and Germany (3.4%). However, the predictions for this year in Germany, in particular, are lower than they were for 2021 (4.6%). According to the survey, it is Britain and Greece that will bring up the rear this year, with only a moderate increase of 1.8% and 0.4%, respectively. Therefore, the specialists foresee that the highest growth rates this year will come in the small and mid-cap sector. Small-cap deals with a volume of less than 100 million euros are likely to grow more strongly, and the potential in the mid-cap segment (100 to 500 million euros) is expected to be only slightly lower.

ESG is relevant – and will continue to grow significantly in importance

Across all national borders, ESG is considered a relevant criterion in the choice of targets. Among the PE specialists, 66% already regard the integration of environmental criteria, social standards and sustainable corporate governance as important or even very important. What is more, the specialists believe that the importance of sustainable business models in the PE sector will continue to grow significantly and, according to the survey, that, in the coming five years, it will either be important or very important to 80% of those surveyed. Environmental concerns (68%) and brand image/reputation (50%) are the most important reasons for this.

In the specialists’ view, the quality of transaction targets is likely to be comparable to last year or even more attractive than it was then (81%). By contrast, 19% of the PE specialists indicated that the target companies would be less attractive than last year (11% in 2021). Nine out of ten specialists consider the multiples paid here to be (significantly) overvalued. In 2021, that indicator stood at just 82%. The number of those surveyed who believe that assets are valued fairly has continued to fall (8%, against 17% in 2021). In particular, valuation multiples are expected to continue to rise in the popular target sectors of technology, healthcare and business services.

The PE Outlook is based on a survey that was conducted at the end of 2021, i.e. at a time when the war in Ukraine was not yet foreseeable.

With a few exceptions, we do not see any significant effects on or cancellations of PE transactions in Western Europe as a result of the Ukraine war. This is also due to the fact that Russia's economic weight - with the exception of oil and gas - is relatively limited in many markets. Transactions involving companies with a strong Russian footprint are of course no longer realistic for most PE funds in view of the sanctions. But so far few deals have been affected.

The longer the crisis lasts, however, the greater the impact it could have on sales processes: the war increases uncertainty about the development of the economy as a whole or of individual sectors. It also reduces the ability to plan important cost items (e.g. energy, raw material prices) and margins, which could make PE investments more difficult in the future.

Sign up now to download the full European Private Equity Outlook 2022 with analysis of current PE market trends and expectations for future developments, and to receive regular insights on private equity and investor support topics.

Sustainable and resilient business models will be key for private equity portfolio development in Europe in 2020 in order to curb economic uncertainty.

The Private Equity Outlook 2021 shows that the industry is optimistic and expects a strong increase in M&A transactions.

Private equity deal activity remained high in the German-speaking region in the first half of 2019. But market concerns are growing.

Roland Berger is the partner of choice for strategic realignment, financial consolidation and operational excellence. Contact us now.