Think:Act Magazine Purpose
The purpose of business is purpose

Why companies need to strive for more than just profit

The long-held assumption that businesses exist simply to make money for shareholders is being challenged. There is a growing trend to focus on the longer term and the wider social impact that a business can have. How has this shift come about? And, more importantly, how can a successful company embrace "purpose"?

With his 1962 book "Capitalism and Freedom", the influential economist Milton Friedman set out the ground rules for how business should interact with society. "There is one and only one social responsibility of business," he wrote, and that was to "use its resources and engage in activities designed to increase its profits so long as it stays within the rules of the game, which is to say, engages in open and free competition without deception or fraud." In other words, it is none of business's business to get involved with anything other than creating value for shareholders. Or as it has been reduced to a now famous adage: The purpose of business is business.

But while that statement was once held as a certainty, it is now being squarely challenged. Today's businesses view their social responsibilities a little more widely. Marc Benioff, CEO of Salesforce, has put it quite bluntly: "To be truly successful, companies need to have a corporate mission that is bigger than making a profit." Since he made that statement, the corporate world has largely embraced the idea that its role goes well beyond delivering profits. It's no longer just about running successful companies; the purpose of business now extends to fixing society's ills. Or, as Paul Polman, CEO of Unilever puts it: "We have to bring this world back to sanity and put the greater good ahead of self- interest."

What brought on this turnaround? Self-interest and the profit motive appear to have fallen by the wayside as business begins to rapidly redefine what purpose means and implements it. Just a casual look at a few 21st-century companies reveals purpose in a number of guises: Companies are hiring "heads of purpose" - a job title that might have seemed nonsensical just a few years ago. In social media marketing, a new kind of "influencer" is gaining favor and glamorous online brand advocates are making way for "activist influencers" whose authenticity, values and commitment to important causes chime better with younger consumers. All of which points to how social purpose now plays a significant role in how businesses run themselves, how they hire staff and how they appeal to customers.

Managers should consider the impact of their company on society

It was not so long ago that showing social responsibility was something businesses did by contributing to a charitable cause or sponsoring a local community event. The concept of corporate social responsibility (CSR) took hold in the 1990s, but even then it was still an activity distinct from the company's core business strategy and, often, it had more to do with PR. It was toward the end of the 1990s that this started to change, and the idea began to grow that being good could also be good for business.

As climate change and the environment rose up the news agenda, social responsibility came out of the PR room and into the boardroom. It was no longer simply a gesture to make a company look good. It was now recognized as a strategic requirement because environmental problems were issues that could hit the bottom line - businesses could not afford to ignore the growing scarcity of natural resources or the fines and damage to public reputation for pollution. Importantly, it also sold well with customers. Since then it has spread to encompass many other issues. Businesses now have to think about the impact they have on the wider society - and purpose differentiates itself from CSR in that it runs through a company's structure and strategy.

Purpose turns from a nice-to-have to a must-have

The idea of "purpose" is now fundamental, so much so that BlackRock's CEO, Larry Fink, wrote to other CEOs in his letter at the end of 2017 that companies without social purpose have no chance in the long term. As the head of the world's largest asset management company, it is very significant that he should make such a strongly worded statement. Today, purpose is not simply desirable, but rather vital for long-term survival.

How did we get here? Fink described the state we are currently in as being "a paradox of high returns and high anxiety" - while some have reaped the benefits of capital growth, others have faced low rates, low wage growth and job insecurity coupled with the growing threat of inadequate pensions. Fink believes that, as a result of these pressures, people are now looking to companies to respond to broader societal challenges. "To prosper over time, every company must not only deliver financial performance, but also show how it makes a positive contribution to society. Companies must benefit all of their stakeholders, including shareholders, employees, customers, and the communities in which they operate," he wrote.

Lynn Stout of the Clarke Business Law Institute at Cornell School of Law, who lost her long battle with cancer in April 2018 a few weeks after sharing her thoughts for this piece, was not at all surprised by these shifting out looks when it comes to business. The author of "The Shareholder Value Myth: How Putting Corporations First Harms Investors, Corporations and the Public", she had been arguing for years that focusing only on maximizing shareholder value is a mistake. She believed this message was finally getting through. "Things have really changed," she said. "Shareholders, particularly institutional share-holders, are increasingly recognizing that the old strategy of asking corporations to focus on so-called shareholder value simply doesn't work, even for shareholders."

Stout believed that one of the precipitating events to this shift in attitude was the global financial crisis that began 10 years ago. "We've had a number of crises over the past years. It increasingly isn't working out for shareholders looking for good returns," she said. Then there's the second key driver, which is climate change. "Young generations are increasingly concerned about its effects because they will be the ones who bear most of its costs," she said. "As they see it, shareholder value doesn't work for the planet, so it's not going to work for them."

As a group, the millennial generation has shown itself in surveys to be very committed to its values, even to the point of being willing to sacrifice material gain for them. "There has been a key shift in people's perceptions away from believing that pursuing your own interest serves society's interest," said Stout. Are we beginning to see a convergence in interests, where good CEOs who intend to be in the business over the long term, take social problems seriously? Fink's letter suggests that this is what they should be doing: Companies should not only avoid creating problems for society, but they should also be actively involved in making contributions that address society's problems.

To be fair to Friedman, he didn't see any problem with company owners choosing to do good. "It may well be in the long run interest of a corporation that is a major employer in a small community to devote resources to providing amenities to that community or to improving its government. That may make it easier to attract desirable employees, it may reduce the wage bill or lessen losses from pilferage and sabotage or have other worthwhile effects," he argued in an article in "The New York Times". What made the difference for Friedman was that such decisions should be taken by the owners of the company operating in their own self- interest under the "cloak" of social responsibility – rather than by corporate executives on the grounds of some general social interest. Friedman believed firmly that market mechanisms were the most appropriate way to determine the allocation of scarce resources to alternative uses in a free society.

A new era of corporate responsibility is about to rise

We could well argue that today's climate of opinion shares some similarities with that of the 1970s in which, as Friedman described it, there was "wide spread aversion to 'capitalism,' 'profits' and the 'soulless corporation.'" Perhaps the rules of the game have not changed so much. Indeed, as Stout pointed out, some of these ideas do have ancient roots: "If you look at the earliest corporations in history, they were created to pursue social projects that would last for generations - they built monasteries, universities and cathedrals," she said. "Business corporations for most of the 20th century had a similar philosophy - managers were stewards of great social institutions run for the benefit of stakeholder groups and the nation. It is only very recently that the focus has become much narrower."

Whether we see it as a return to an older model or a turning point for capitalism, many different voices are saying that business is changing in this direction. We are entering a new era of responsibility which offers an opportunity for the private sector to help tackle issues that affect wider society and collaborate in designing solutions that create sustainable value for humanity. As Indra K. Nooyi, CEO of PepsiCo, once put it: "The blind pursuit of profit at all costs is untenable. It is essential that we make money the right way. After all, if communities suffer as a result of a company's actions, those returns are not sustainable."

Further reading
Interview
A recipe for long-term success in times of change
article
The right way to talk about corporate purpose
Interview
The definition of the purpose-driven economy
interview
How to define purpose without being too narrow
Other TAM Purpose articles
interview
How to build a company that's built to last
article
Silicon Valley's strategies to overcome the downsides of digitalization
article
Become a master of social media for business
article
The connection between religion and business
article
Waste management: looking at a global challenge
article
Inside a purpose-driven new business model
article
Quantum technology is leaping into our lives
interview
The future of business will be driven by purpose
article
Is the Russian economy ready to boom?
interview
Adidas is racing ahead into the digital future
article
The making of India’s biometric Aadhaar ID program
interview
What makes capitalism tick?
Our Think:Act magazine
Think:Act Edition 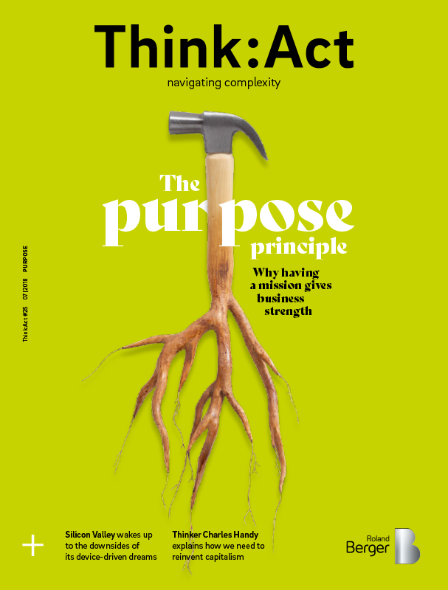