Digital Darwinism author Tom Goodwin weighs in on Gen Z, radical change and the importance of being unique

Many voices offer guidance for our increasingly complex digital age. Yet one stands out with unique common sense and humanity. Tom Goodwin, author of "Digital Darwinism", assesses the challenges and opportunities, the need for radical change and what it is that people really want.

What do today's teenagers in Montenegro think about the digital world? If you want a glimpse of the consumer of the future, there is no better place to start than by asking Generation Z. Tom Goodwin has been finding out how this age group views technology, and the answers might come as a surprise. "I was giving a talk at Spark.me in Porto Montenegro. It's a technology and business conference that’s become an annual draw for the industry," he says. "Afterwards, chatting with a group of 17- and 18-year-olds, they said they liked my talk about the role devices play in people's lives today, but I should be aware that for them it's not like that. They said they see their mums come home and spend time on Facebook, and it appals them."

For the executive vice president and head of innovation of Zenith Media, this was gold dust. Goodwin spends his time traveling the world, speaking, writing, talking to people and, most importantly, observing and listening – gathering evidence from different regions across the planet on what people with different perspectives really want. "What I saw in these teenagers is a behavior that not many are talking about yet," he says. "They didn't have the latest smartphones; they had dumb phones. They are in some ways rebelling against the digital world."

Goodwin is back in his apartment in New York, where he is touching down briefly between travels. "To call it a home would be an overstatement," he says. "It's where I keep my stuff." Goodwin grew up in a village in 1980s England, when free time was spent roaming the streets with friends and it was still possible to experience boredom. In many ways, he is well placed to understand and comment on the radical changes that the digital age is bringing to our lives. Young enough to be a digital native, yet old enough to remember what life was like before, he spans the digital divide. He is a rare voice among digital disruption commentators, combining inspiration and common sense in his analysis of where we are and where we should be going.

Digital Darwinism: Survival of the Fittest in the Age of Business Disruption is a synthesis of all these layers of experience. The book is intended as a wake-up call to businesses that have failed to grasp how fundamentally the digital revolution is changing our world. It looks at the past, present and future of the digital age, challenges our preconceptions and provides a guide to survival. Far from wishing to instill fear, Goodwin is excited by the opportunities that digital transformation has to offer and wants to help business leaders make sense of what is happening, embrace the new possibilities and successfully navigate what he calls "this moment of peak complexity."

Real change is hard. And the problem, Goodwin argues, is that most businesses are still failing to understand and adapt to the new paradigms of our digital world. They are focusing too much on technological advances while making merely incremental changes to the way they do business. What is required, instead, is radical change – a rethinking of the core of the business to focus on making people’s lives more comfortable, using digital technology as a means to this end. If the teenagers in Montenegro are anything to go by, companies that fail to grasp this risk being swept away into irrelevance. Evolution is not kind to losers.

The provocative question at the heart of the book is one that Goodwin says all businesses need to ask themselves: "What would my business look like if it was created today?" The answer will probably be very annoying – it is likely to turn out that the assets and skills that have taken years to acquire may no longer be fit for purpose. In a world where the biggest taxi company owns no vehicles, the most popular media owner creates no content, the most valuable retailer has no inventory and the largest accommodation provider has no real estate, as Goodwin put it in 2015, "something interesting is happening."

The barriers to real change, however, are many. To understand how high these are, Goodwin describes modern businesses as skyscrapers – they are built on deep foundations that represent the best thinking at the time. Their steel structures are the company’s culture and processes. The easiest thing to change in such a huge building is the superficial layer, the visible part that faces the outside world. But such change is "illusory," he says. If all you do is embrace a new communication platform or add a gimmick to your website, you are failing to address what really matters. The world is changing fast and it may be that your skyscraper is no longer in the right location – the purpose for which it was built is no longer relevant. How are you going to move it?

Addressing this level of change involves time, expense and risk: in a word, "self-disruption." But Goodwin believes businesses cannot afford to ignore these issues if they want to own their future. "People don’t like change – especially if it is going to take a long time and is not judged by current calculations to be essential – and they hate risk," says Goodwin. "The problem is that, often, you can’t see the cost of not doing it yet. There are lots of logical reasons not to change and that's what you have to fight against." Part of the reason for this lack of change is that we are still only in what Goodwin calls the "mid-digital age." As he explains it: "We are still using pre-digital thinking and pulling it through a digital lens. It's like electricity. In the early days people just thought about how to electrify existing things. It was a long time before new things were created around the potential of the technology."

So, it's not enough to put an iPad next to the cash desk and think you have created a modern retail environment. The whole concept of the cash desk has to change. "The focus should not be on technology, but on people and providing them better service," says Goodwin. "People don't care what the technology is that does this, they just want things to happen." As he says this, you can feel his excitement about what is possible but also his empathy for real people and their everyday problems. He knows their aspirations and their frustrations. He knows how annoying it is when you can't get Wi-Fi, are forced to wait at a service desk or confronted by a confusing interface. When he looks at a new gizmo, he tries to imagine how he would use it, and then how other people might use it: Would it be a help to a woman on her way to work in Shanghai, for example?

It's a very non-technological skill that comes into play, one that Goodwin exudes: empathy. He is a keen observer of human behavior and a clever marketeer, but also a person who you can have a genuine conversation with – he listens as much as he talks. Goodwin warns that many companies have not realized how important these skills are. "They are still praying at the church of code and algorithms," he says. "They need to understand that the skills that will matter in the future are softer skills: thoughtfulness, pondering and serendipity. We’re a long way from that."

This may sound way out there, but Goodwin is passionate in his belief that what is required is radical change – based not just on copying what has been done before, but on a vision of the future. How do you see the future? "You have to look for the things that resonate with and drive people. The rest is insignificant – just a fad," he says. These kinds of insights cannot be delivered by studying data alone. "You have to feel and smell your way into understanding the future," he says. "The evidence for what drives us is out there. It’s about looking at a high street or shopping mall, and observing how people behave, listening to what they say and what they don't say." If you do this, he says, you can "feel" how the economy works.

Tom Goodwin is executive vice ­president and head of innovation for Zenith Media, one of the world’s largest media agencies. He has twice been voted to LinkedIn's Top Voices in Marketing and Social Media and was named one of 30 best people in ­advertising to ­follow on Twitter by Business Insider. Digital Darwinism is his first book. He has contributed to The Guardian, TechCrunch, Forbes, Ad Age, Adweek, Marketing Week, Inc., Digiday and the World ­Economic Forum.

The future is not a leap in the dark, in this case, and the answers are around us if we look and listen carefully and with empathy. "A lot more information comes to us than we realize. Our gut instincts are actually based on billions of data points that we're processing without realizing it," he says. For now, Goodwin believes we are in an innovation lull. "We’ve had mobile apps for well over nine years and yet some big companies' apps are still terrible. There are banks that still presume that the customer experience is about the quality of the marble in the lobby and the solidity of the safe. In fact, it's about how easy it is to pay people and whether the app saves your password," he says. "Airlines think their KPIs are about on-time performance, but they should be about how people feel about their on-time performance."

Many of the things that will go into bringing about transformative change are still a way off from being reality, things such as self-driving cars and artificial intelligence. But for Goodwin, the true test of digital transformation will be when its benefits are felt across societies all around the world. "It needs to solve more real problems for women in Rwanda and families in Rio de Janeiro; to create a sub-Saharan bus network, or help people in Africa stop corruption," he says. "We also need to figure out a way to pay for content properly, because many of the problems that we have in the world today have come about from the need to monetize content with our attention and that has led to the rise of fake news and a more extreme political environment."

We still don’t have lightbulbs that come on automatically or fridges that can cook meals. But Goodwin believes passionately that digital technology will bring about profound changes in the way we live our lives – and when it does, it will change our entire conversation on the topic. "When that happens, we won't be talking about digitalization anymore because digital technology will simply be assumed," he says. "We'll know we’ve got there when the idea of employing a chief digital officer sounds as ridiculous as employing a chief electricity officer today."

About the author
Janet Anderson
Janet Anderson is a Cambridge-educated writer and editor. As a writer, she has contributed to various B2B publications and has worked for many business clients including a large logistics company and a leading chemical producer on their corporate communications.
Download full edition
Think:Act Edition 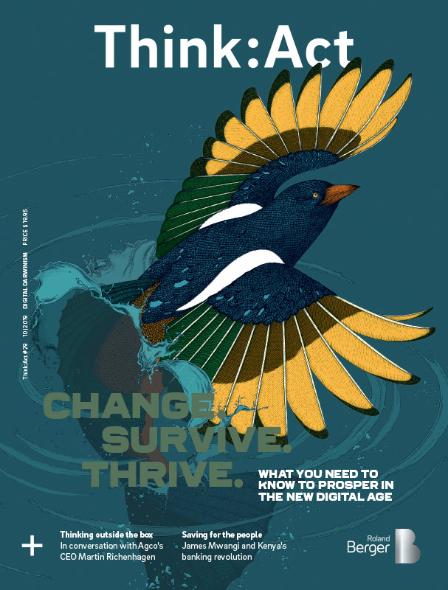