A complete decoupling is neither likely nor desirable

In these times, a decoupling of the Chinese economy from Western economies is widely discussed in the political, business, academic, media, and public domains. This is, on the one hand, a result of Western economies seeking to become more independent from China and looking at China as a strategic competitor. On the other hand, China is currently also shifting its economic focus onto domestic consumption and the production of highly innovative products instead of being "the world's factory."

But will these tendencies lead to a complete decoupling of China from Western economies? This is neither likely nor desirable because the mutual dependencies between China and the world economy are simply too strong.

This argument can be illustrated, first, if one takes, a closer look at the Western dependencies on China and, second, by analyzing China’s dependency on the Western economies.

Western economies need China as a supplier, a manufacturer and a sales market

China successfully integrated its economy into global supply chains in the last decades and, thus, has a strong position as a supplier for Western economies. This is proven not only by the fact that the amount of trade between China and foreign countries has grown to an enormous level, but also when we take a closer look at strategically important products. These are products that are essential for the functioning of an economy. Which products are strategically important depends on the structure of an economy – e.g. for a country like Germany, the automotive sector is crucial as it contributes a lot to Germany's GDP, employs many people, and is deeply connected to other sectors. So, for Germany, automotive parts are strategically important products.

China's importance as a supplier of intermediate and final products is based on its strength as a manufacturer. And this is not only the case for B2B products but also for a broad range of B2C products: "Made in China" is a very common sight on the label of many consumer products. In 2020, China's share of global manufacturing value added was nearly 29%, making the country the global manufacturing champion (figure 2).

China’s economic strength as a supplier and a manufacturer should not let us ignore the enormous importance of China as a sales market for Western economies. A lot of Western companies generate a large share, or even the majority, of their revenues and profit from the Chinese market. This is due to the sheer size, growth, and prosperity of the market. China has a population of 1.4 billion people. The nearly 550 million households have enormous purchasing power: In PPP terms, 40% of Chinese households belong to the middle class, earning USD 15,000-45,000 p.a., and 9% earn more than USD 45,000 p.a. In total, 264 million households have a disposable income above USD 15,000 p.a. If Western companies want to enlarge their customer base, they have to be active in this market.

Let us now switch our perspective and look at China's dependence on the West. China is the country with the biggest import volume worldwide. In 2021, China imported goods and services worth USD 3,091 bn, equaling more than 17% of its GDP. The most important import goods are semiconductors and resources, namely energy resources, iron ore, and copper. The five biggest suppliers are developed countries, with the EU in top spot.

Considering the structure of the major import products, it will not be easy to substitute them, to produce them in China, or to replace the major suppliers. This is particularly the case for China's no. 1 import product, semiconductors, which accounts for more than 16% of the value of China's imported goods. China produces a lot of chips, but so far it does not have the technology to manufacture the ultra-high-performance semiconductors that the country needs to embed in high-tech products. The technology for the production process lies in the hands of a few companies in developed countries (located mainly in Taiwan and South Korea), as does the technology for the machines needed for production.

But China needs the Western Economies also as a market for their exports. China is the world's biggest exporter. In 2021, the country sold goods and services worth USD 3,554 bn to foreign markets, equaling 20% of China's GDP. China's export strength was the basis of the country's high growth rates and is still an indispensable element of its economy. China's top export destinations are the US and the EU: In 2021, more than one third of the exported goods went to these markets.

Finally, China’s dependency on Western Economies can also be illustrated by foreign investments. Foreign investments are essential for China's economy. In 2020, more than 1 million foreign-invested enterprises were registered in China and FDI stocks reached a total of USD 2,440 bn, according to the Statistical Bulletin of FDI in China 2021. Foreign companies are crucial for China's economy as they invest, employ people, and transfer know-how. Since 2017, China is the world's no. 2 destination for FDIs, beaten only by the US.

A decoupling would lead to significant losses on both sides

What is rather likely to occur in the future – due to current political and companies’ strategies – is a balanced reorientation of the economic relationship between China and the West. Such a reorientation can be to the benefit of the two parties as well as of third parties. Compared to the situation today, there will be tougher competition, particularly for Western companies, who will be forced to keep hold of their technological advantage against the emerging players from China. But there will also be new possibilities for fruitful cooperation when Chinese companies have climbed to the next rung of the innovation ladder.

A complete decoupling is neither likely nor desirable 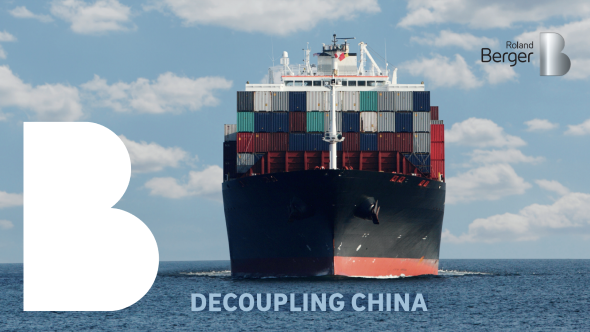 In these times, a decoupling of the Chinese economy from Western economies is widely discussed in the political, business, academic, media, and public domains. This is, on the one hand, a result of Western economies seeking to become more independent from China and looking at China as a strategic competitor. On the other hand, China is currently also shifting its economic focus onto domestic consumption and the production of highly innovative products instead of being "the world's factory."

China's economy is undergoing a profound transformation. China has ceased to be the low-cost country with few regulations and a stable political environment. How should multinational companies react to the challenges that come with these instabilities? Should they reduce their footprint in China or leave the market altogether?

Read more on how the world’s largest automotive market is changing and which market strategy China will have to adopt to meet the new demands successfully.

Bifurcation and relocalization – Disruptions in the market for semiconductor chemicals