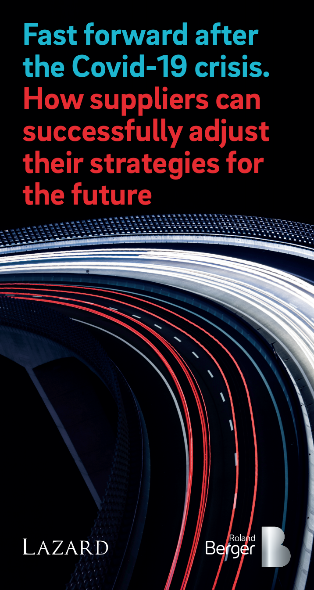 By Florian Daniel and Felix Mogge

The Covid-19 pandemic is burdening all suppliers. Only a few will be the winners of tomorrow

Technological change has been affecting the automotive industry for several years now. After a prolonged period of high performance, the operating profit margin of automotive suppliers has been declining since 2018. At the same time, the transformation of the industry towards new mobility trends, autonomous technologies, digital features and electric powertrains, or MADE for short , is gathering speed. As if that weren’t enough, the coronavirus pandemic has further aggravated the already difficult situation for suppliers. Operating profit margins in the first half of 2020 reached a historic low of 1.7 percent. And sales this year will fall by an average of between 15 and 20 percent globally compared to 2019 .

But the automotive experts from Roland Berger and Lazard are certain that automotive suppliers can break out of this downward spiral and, with the right strategy, lay the basis for success in the coming years. In the Global Automotive Supplier Study 2020, Roland Berger and the US investment bank Lazard have worked out how companies can act now to emerge stronger from the crisis. The study analyzed key performance indicators of around 600 global suppliers.

Get the full version of the study

Car sales figures to remain below pre-crisis level for years

Felix Mogge, Senior Partner at Roland Berger, expects no more bad news for at least the last few weeks of 2020. "Despite difficult underlying data, a conciliatory year-end is emerging," he says. China is the main reason that a positive average operating profit margin has been maintained. Compared to Europe and North America, China has recovered relatively quickly and is able to secure robust sales figures for OEMs. However, the 2017 peak in global passenger car sales (94.3 million) will not be reached again until 2026. China will catch up more quickly and thus gain further automotive market share, while it will take longer in North America and Europe.

This difficult environment and the forecasts have a negative impact on the creditworthiness of suppliers. In recent months, some have been downgraded on the financial market in an illustration of what the industry can expect in the coming months or years. The financial pressure is set to increase further. "After the current slump, many suppliers simply lack the capital for the necessary technological transformation," states automotive expert Mogge.

Emerging successfully from the crisis with the "Winners Framework"

Despite this challenging initial situation, companies can break out of the downward spiral. Every crisis that changes market dynamics also offers an opportunity for the future. A look back at the 2008/2009 financial year shows that one group of suppliers was able to use the financial crisis as a starting point to subsequently generate above average returns for their shareholders for years to come.

In their "Winners Framework", the automotive experts have identified four universally applicable characteristics that will distinguish successful suppliers from average market players today, as it did back then. "Companies are facing a balancing act between restructuring and strategic realignment," says Florian Daniel, Principal and automotive expert at Roland Berger. "With our 'Winners Framework', we provide automotive suppliers with clear guidelines that enable them to position themselves in the market as tomorrow's winners."

Stronger consolidation of the industry is imminent

The slump caused by the Covid-19 pandemic and technological transformation in the automotive ecosystem will continue to impact the margin performance of automotive suppliers for years to come, and not all of them will emerge from the crisis as winners. It is therefore already clear that the resulting challenges will structurally overwhelm some companies. "As a consequence, we will see a stronger consolidation of the industry," expects Felix Mogge.

Suppliers in the automotive industry do not therefore have an easy road ahead: To be among the winners, they must strategically develop their business – which can also involve investments – while at the same time significantly reducing costs. They must review all activities and divest unprofitable business units. They must take risks and focus on future growth areas that are currently not profitable. And last but not least, they must enter into strategic alliances to gain access to new technology or reach a relevant market size.

Covid-19 pandemic intensifies the downward spiral of automotive suppliers. What measures must now be taken?

Published November 2020. Available in
Download ()
Get the full version of the study

Register now to download the full version of the 'Automotive Supplier Study 2020' and get regular insights into automotive topics.