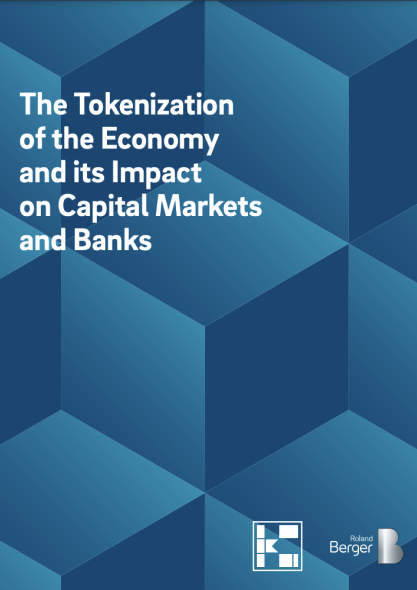 Tokenization: The future of financial markets?

Blockchain technology is revolutionizing the financial services industry. One of the most recent – and potentially most disruptive – of blockchain-based innovations is asset tokenization. Thanks to the transparency, cost efficiency and accessibility it affords, tokenization can trigger the creation of a new financial trading system. While its full potential impact is yet to be understood, Roland Berger & Keyrock’s study – that focuses on tokenization’s impact on equity trading – shows as adoption increases, tokenization of equity post-trading could lead to gains of EUR 4.6 bn by 2030. But it doesn’t stop there. The analysis shows that tokenization has the potential to bring opportunities to core activities across the whole financial services spectrum thereby making it clear that now is the time to act.

In easy to understand terms, tokenization is the process of converting any rights or assets into a digital token that can then be used, owned and transferred by the holder through a blockchain, without the need for a third-party intermediary. Roland Berger & Keyrock’s study focuses specifically on investment tokens, which can offers its holder the same voting rights, rights to future cashflows,… as traditional shares or bonds can do, but in a digitalized form, allowing the ownership of these assets to be kept up to date via a decentralized ledger.

Tokenization isn’t without its challenges though. There are significant hurdles that need to be addressed from investors to issuers:

However, tokenization has the potential to mitigate the complexities and inefficiencies associated with the current post-trade process. For example, the secured interlinkage of financial institutions and traders through blockchain could potentially eliminate the need for the clearing process, and considerably shorten settlement times.

Equity trading at the forefront

While large-scale applications of tokenization do not yet exist, it is likely imminent in one area – equity trading – for a number of reasons. Blockchain technology has been doing the rounds in the equity markets, so most proof-of-concepts already exist. Secondly, the shift is made less daunting as equity is already largely dematerialized. A smoother transition is also assured because of the high technology adoption rates in the equity markets. And finally, the market size makes it the ideal candidate for scaling up.

Once the adoption of tokenization takes off, driven by harmonized regulation and systems, our analysis shows that tokenization of equity post-trading could lead to gains of EUR 4.6 bn by 2030.

What is clear is that now is the time to act. The example of equity trading clearly shows that tokenization is not only here to stay, but can have a major disruptive influence across the financial spectrum , resulting in irreversible change.

To determine the impact of tokenization in specific cases, we recommend a four-step approach that includes (1) Evaluating the implications of tokenization on the business model, (2)Defining a target vision for each business line and core activity related to it, (3) Developing a capabilities roadmap, and (4) Designing the modus operandi.

Register now to download the full PDF about blockchain technology and tokenization to get regular insight into Banking and Capital Markets.

AI in financial services: How banks and insurance companies can use radical change for their success.

How Belgian banks can shape their digital future

Blockchain and its impact on digital identity

Blockchain is poised to revolutionize the way we do business